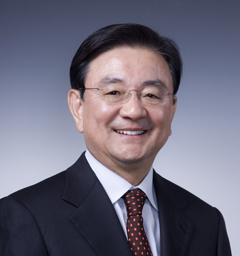 Hong Seok-hyun, chairman of the Joongang Ilbo and JTBC, was appointed president of the Korea Amateur Baduk Association (KABA) yesterday during its regular meeting of representatives at Lotte Hotel in Sogong-dong, Jung District, central Seoul. The decision by the 15 representatives was unanimous.

KABA is a regular member of the Korean Olympic Committee and follows its election management rules. Baduk is a Korean strategy board game.

“I will put every effort to resolve pending issues, such as passing the Baduk Promotion Act and working toward the second baduk boom by enhancing the competitiveness of our Korean players,” Hong said in his acceptance speech at the meeting.

With this appointment, Hong is now the head of the two major baduk organizations. He was elected president of the Korea Baduk Association (KBA) in December at the temporary board of directors.

Hong also briefly served as an ambassador to the United States in 2005.

Hur Dong-soo, the chairman of GS Caltex, was KABA’s former president, inaugurated in January 2013. He has served as KBA’s chairman of the board since 2001. To honor his efforts over the past year, Hur was presented yesterday at the meeting with a baduk table engraved with words of gratitude.