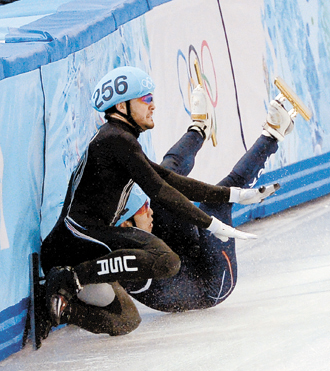 The nightmare at Sochi continued Thursday for the Korean men’s short track team. The team, which consists of Shin Da-woon, Lee Ho-suk, Lee Han-bin and Park Se-yeong, failed to advance to the final of the 5,000 meters for the first time in 12 years. The worst moment of the night came when their former teammate, Ahn Hyun-soo (Viktor Ahn), led Russia to the final. With two of the strongest contenders in the event - Korea and Canada - being eliminated in the semifinals, Russia’s chance of winning a medal is higher than ever.

In the semifinals held at the Iceberg Skating Palace, Korea was racing against the United States, the Netherlands and Kazakhstan. Everything went well until there were four laps to go. Lee Ho-suk, 28, collided with an American skater while making a turn, destroying the team’s hopes of making a comeback from Monday’s 1,500 meters on, in which all three Korean skaters failed to get a medal. The judges ruled that Lee interrupted the U.S. team, giving the Americans a chance to compete in the final on Feb. 22.

Lee repeated the same mistake he made during the 1,500-meter final in the 2010 Vancouver Games. Lee and two other Korean skaters - Sung Si-baek and Lee Jung-soo - led the race, but Lee Ho-suk collided with Sung while taking a corner in the last lap. Lee Jung-soo won the gold medal, but the collision cost Korea its chance to sweep all three medals.

Things didn’t get any better in the Group B semifinals, in which Canada was expected to win. While Canada had the same problem as Korea, Ahn led the Russians from third place to first late in the race with sharp positioning in the corners and dominant speed. The win gives Russia the chance to go for the second short track medal in its Olympic history. Ahn won the country’s first medal - a bronze - in the men’s 500 meters earlier this week.

Ahn cheered out loud when crossing the finish line, and the crowd greeted him with cheers as well.

While the Korean team continued to struggle and Ahn shines while skating for Russia, fans in Korea have taken to the Internet to bombard the Korea Skating Union with criticism.

Whenever a Korean skater has struggled, the union has been blamed, regardless of the reasons for those struggles. Fans have even criticized Lee Ho-suk, the only current team member who was a teammate of Ahn’s in 2006. There is speculation that Lee interrupted Ahn’s race in a championship event that year.

After the criticism of Lee continued for hours, Shin Da-woon, Lee’s teammate, posted a message on the official Facebook page of the Korea Olympic Committee that read, “Please stop the madness on Lee. He is the one who is trying so hard to win a medal to help us get a military duty exemption and he was the one who cheered me up when I was in despair after falling down during the 1,500-meter race.”

But the fans didn’t care. They posted messages that blamed Shin, which said, “Is this written by the skating union?” and “Do you race in the Olympics to avoid military duty?”

Skating union officials will likely face more pressure because the government said on Thursday that it will look into the power struggles of the union that influenced Ahn into changing his nationality.

Park We-jin, director of sports of the Ministry of Culture, Sports and Tourism, said that the ministry will look into whether the national team member selection match in 2009, in which Ahn was eliminated from the team, was fair. Ahn Ki-won, Viktor’s father, insisted that the skating union had changed its rules to disadvantage his son, who underwent knee surgery in 2008 and had a long rehabilitation.

In April 2006, Ahn’s father told the media that his son’s teammates had attempted to prevent him from winning the gold medal in international matches under orders from the team’s coach. He claimed the divide was rooted in fierce university loyalties - Ahn was a graduate of Korea National Sports University, the country’s leading short track program - but some in the union wanted athletes from other universities to win international matches.

In the 2006 Turin Olympics, Ahn trained with female national team members as the men’s team consisted mostly of athletes from other universities. Even some female skaters, like Jin Sun-yu and Byun Chun-sa, neither of whom were graduates of Korea National Sports University, practiced with the men’s team.

“In a meeting with officials from the education and sports ministries, the president said the government needs to look carefully at whether these agencies are running correctly,” Park said. “So we will re-check on the issue to root out any wrongdoing.”

Earlier this month, the Seoul Central District Prosecutors’ Office, at the request of the Sports Ministry, launched an investigation into 10 government-run sports agencies, including the Korea Baseball Organization, to root out any corruption, but the skating union wasn’t included in that investigation.