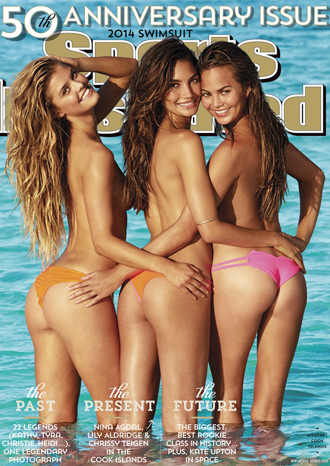 LOS ANGELES - Sports Illustrated is marking the 50th anniversary of its swimsuit issue with three models on the cover.

The image was unveiled Thursday on ABC’s “Jimmy Kimmel Live!” The issue hits newsstands and digital formats next week.

Aldridge said in an interview Thursday she was “in shock” over her selection.

“It’s the most incredible honor to be a Sports Illustrated cover model,” she said.

Especially since it’s the 28-year-old Victoria’s Secret model’s first time in the magazine.

Even though Teigen has appeared in the swimsuit issue five times before, she never expected to land on the cover. “It’s the ultimate surprise, and it’s the best feeling in the world right now,” said the 28-year-old, who recently married musician John Legend.

The last time multiple models appeared on the cover of the magazine’s swimsuit issue was in 2006.