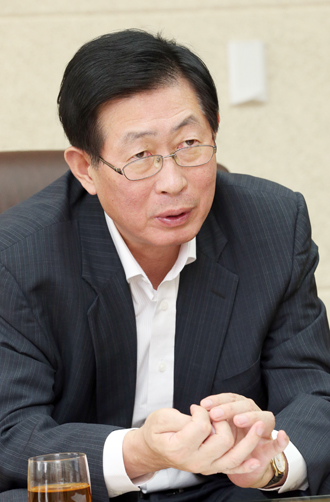 Unlike many other state-run companies, which are selling off overseas assets in an effort to reduce debts, the Korea Electric Power Corporation says it will continue expanding overseas.

At a press meeting in Yeoksam-dong, southern Seoul, on Thursday night, Cho Hwan-eik, president and CEO of Kepco, said that the company already worked hard to reduce its debts last year, so will keep pushing for overseas projects this year, exploring new markets in emerging countries.

At the beginning of the year the Blue House as well as the Finance Ministry vowed to improve the debt situation of public companies. Earlier this month, 18 public companies, including Kepco, agreed to reduce their debts by 40 trillion won by 2017.

As Kepco’s share of that promised reduction was as much as 10 trillion won, it planned on selling almost half the shares from its Bylong coal mine exploration project in Australia.

The mine project is 100-percent owned by Kepco and is expected to generate profits of about 590 billion won annually.

The company plans to secure cash from one of its key overseas projects, but will keep expanding its ongoing projects in the Middle East.

“Overseas projects are a 100-percent surplus generator for Kepco. And the surplus of those quality projects is getting even larger,” Cho said.

Overseas business accounted for about 6 percent of total sales last year, according to a senior official at the company.

The Kepco CEO said the company had a strong future in the Middle East. He said that Kepco will be supplying 23 percent of the total power consumption in Jordan once all its power plants are completed. 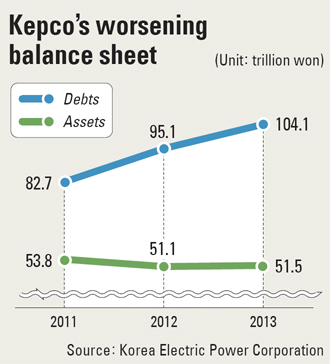 At the end of last month, he travelled to Kepco’s nuclear power plant construction sites in Barakah, United Arab Emirates, as well as the Al-Qatrana gas-fire power plant complex and the Al-Fujeij wind power plant in Jordan, along with Yoon Sang-jick, the minister of Trade, Industry and Energy.

From the UAE, the state-run company has received orders worth $20 billion in a consortium with four local construction conglomerates to build four nuclear power plant units in the Barakah complex, solely with Korean technology.

Kepco recorded sales of 5.4 trillion won in 2013, a jump of 9.3 percent compared to the previous year. The company obtained 1.5 trillion won in operating profits, returning to a surplus for the first time in six years with a net profit of 185.5 billion won.

Cho said he would further accelerate debt reduction, with the goal of meeting eliminating its debts faster than other public companies.

“We are aiming to complete paying off our debts at least a year early compared to other companies,” Cho said. “In order to do that, we will sell our assets [its current Seoul headquarters] at as high a price as possible.”

Regarding an average 5.4 percent electricity price hike in November last year, reporters raised criticisms that the company was being managed inefficiently.

Cho pledged that he would review overall electricity prices and the amount charged for each usage category, such as industrial, household and educational, in a bid to show transparency.

But he declined to specify about the possibility of a future price hike.