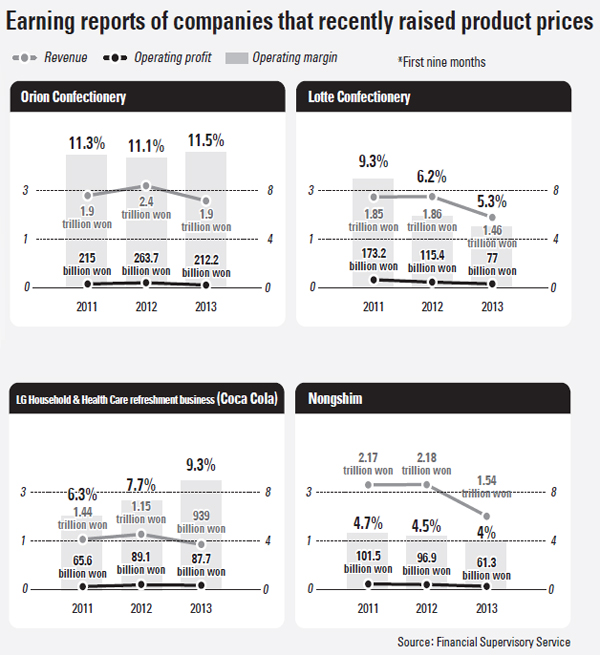 The price hike started with Orion Confectionery, which increased the price of its popular Choco Pie up 20 percent at the end of last year, and soon many other companies followed, including Nongshim, Coca Cola and Lotte Chilsung Beverage.

Coca Cola, for one, said that more than 80 percent of its costs lie in sales-related costs, which have been steadily rising.

However, civic groups and related agencies say this is just another round of excuses to raise prices.

“Those food and beverage companies, whose raw material prices haven’t gone up, have just come up with another reason,” said Kim Jin-seok, chairman of the Korean Food Marketing Association.

The Korea National Council of Consumer Organization noted that raw material costs have actually been falling.

“On the contrary, there are reasons for companies to lower their prices because raw material prices have been falling due to the depreciation of the Korean won,” said an official with the consumer-protection organization.

“Although official we said we raised the price of our products because of the rising cost of raw materials, in reality our sales costs, including promotions, surged to a burdening level,” said an official at Orion.

Lee Ki-shik, an executive at Korea Food Research Institute, backed the food and beverages companies. He said the price hike isn’t all about raw material prices and the companies should not be blamed. The executive that said when companies decide to raise the price of their products, it also puts a burden on sales.

“As the power of retailers has grown, the promotion burden on manufacturers has increased as well,” said Lee.

In sales data the JoongAng Ilbo obtained from Lotte Confectionary, it showed that overall sales costs have increased 16.5 percent.

“Because of these burdens, our operating profit has been falling every year,” said a Lotte official. But even taking into account the big rises in sales costs, companies’ profits were not looking as severe as the last time they raised prices. In fact, some companies saw their operating profits improve sharply.

Lotte, whose operating margin in 2012 was 7.7 percent, saw its margin rise to 8.9 percent in the first nine months of last year. Orion’s operating margin went up from 11.1 percent to 11.5 percent.

Those returns are better than the average operating margin for manufacturers in Korea.

According to LG Economic Research Institute, manufacturers overall posted an annual average operating margin between 2010 and 2012 was 5.8 percent.

“This is a situation where the big companies that could withstand a temporary drop in sales are the first to raise prices,’ said Kim Joo-young, business management professor at Sogang University.

Lee Jung-hee, an economics professor at Chung-Ang University, said the reason the price hikes have mostly come since the end of last year is because of public criticism.

“There have been cases where companies that raised their prices in times of overall inflation were harshly criticized for adding to the burden [on middle- and lower-income households],” said Lee. “For such reasons, companies tend to prefer to make surprise hikes.”

In both December and January, consumer prices grew at an annual rate of 1 percent.