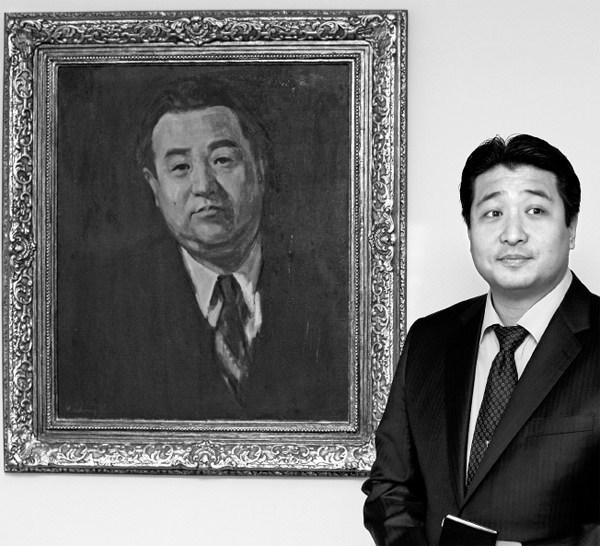 Chun In-keon, a secretary general at the Kansong Art and Cultural Foundation, poses next to a photo of his grandfather, who founded the organization. By Kwon Hyeok-jae

For the first time in 76 years, Kansong Art Museum is holding a paid exhibition. The museum in Seongbuk-dong, northern Seoul, is undergoing a major transformation these days.

It was originally founded in 1938 by collector Jeon Hyeong-pil (1906-62) to preserve historical relics during the Japanese colonization era and was called Bohwagak at the time.

As the country’s first modern-style, private art museum, it is home to some 5,000 works. The museum used to have free exhibitions twice a year, and except for at these events, it stayed closed.

Displaying a number of national treasures, the museum served as more of a nonprofit research institution than an exhibition center.

However, with a new foundation established in August, the institution is making a major change.

Some fear that the museum, which didn’t even have a homepage until recently, is damaging its reclusive identity and rarity by opening to the public.

Chun In-keon, the secretary general of the Kansong Art and Cultural Foundation and the founder’s eldest grandson, is leading the makeover.

I have never thought of owning the art museum,” Chun said. “I have just been helping [with] administrative and financial work.”

Chun was born in 1971, when Kansong Art Museum started to hold regular exhibitions in spring and autumn.

After graduating from Boseong High School, he went to the United States to study Asian history at Lewis and Clark College in Portland, Oregon.

Chun returned to Korea and worked at Boseong High School as an administrative department staff member. His grandfather had bought the school in 1940 in order to protect educational and cultural heritage.

“The art museum wasn’t always open, even to me,” Chun said. “I had to go to the National Museum to see Korean heritage when I was young. So, one of my plans is to make a permanent exhibition for visitors to drop by anytime.”

He said the permanent exhibition is part of a long-term plan to build a separate display venue next to the original building.

“My grandfather made hard efforts secretly during the Japanese colonization era in order to keep our heritage,” he said.

“My father focused on protecting what his father had been trying to keep.”

Starting from next month through September, the Kansong Collection will be displayed at the Dongdaemun Design Plaza, which will be the museum’s first outside exhibition. Although it is Kansong’s first paid event, the entrance fees are cheaper than other exhibitions: 8,000 won ($7.50) per adult and 4,000 won for students.

“I hope visitors take this as the cost of a new change,” Chun said.

The Kansong Art Museum is a member of the International Council of Museums, but it is not registered under domestic law, because its staff and facilities are not big enough to operate for 300 days a year.

“I wish the government would support such small art museums,” said Chun.