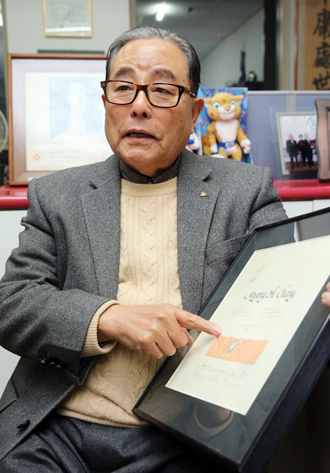 Chang Myong-hi shows his 1988 Calgary Winter Olympics participation certificate. Chang, who is at the Sochi Games, has been in 11 Olympics as a supervisor, manager and international organization director. By Kang Jung-hyun

Korea has come a long way in the Winter Olympics since 1948, when Korean athletes first participated in the Games at St. Moritz, Switzerland.

The country won its first medal in the 1992 Albertville Olympics. Between 1992 and the 2010 Vancouver Olympics, Korea has won 45 medals, including 23 golds, 14 silvers and eight bronzes. In Vancouver, Korea finished fifth in the medal count with six gold, six silver and two bronze.

Chang Myong-hi, 82, the president of the Asian Skating Union (ASU), has experienced the growth of Korea’s winter sports firsthand for nearly 40 years. Since the 1976 Innsbruck Games, Chang has been on the scene as supervisor, manager and international organization director. He vividly remembers speed skater Kim Yoon-man winning a silver medal in the men’s 500 meters in Albertville in 1992 and Kim Yu-na winning her gold medal in figure skating at the 2010 Games.

However, the Olympics were once a stage for fierce political conflicts. In the 1980 Lake Placid Olympics, during the cold war, the tension between the Soviet Union and the United States was intense.

“Back then, they used the newly built prison in New York for the Olympic Village,” said Chang. “The Soviet Union team left for another place, saying they could not stay there.”

He also recalled an incident in which the military used a dump truck to move snow because it didn’t snow until the night before an event started. “But then it snowed heavily, so they had to remove the snow again,” he said, laughing.

Of course, what makes him so happy when observing the Olympics is the growth of Korean skating. “When Kim Yoon-man first won the silver medal, there were no Korean journalists,” he said. “No one was expecting a medal. Everyone was watching the TV instead of being on the scene.” When the Korean journalists started looking for a picture of the historical moment, he gave them one from Japan’s NHK broadcasting system.

The conditioning of the athletes was also very different then. Korean speed skater Lee Young-ha spent most of his time traveling when he won the 1976 World Junior Championships, beating the globe’s best speed skater, Eric Heiden of the United States.

“After taking a train to get into Italy and transferring to a bus in Sorrento to go three and a half more hours, he arrived at the athletes’ village at 1:30 a.m.,” he said. “He rested the next morning and started practicing in the afternoon to participate in the competition a day after. This is not understandable to players nowadays.”

But Korean skating showed steady growth. In 1976, Yoon Hyo-jin was ranked 17th place after being taught by American coach John Nicks. In the 1980s, the speed skating team was assigned to a Norwegian coach. With these efforts and more, Kim Yu-na and Lee Sang-hwa have become the world’s best skaters.

“After seeing short track racing in Japan, I thought it could fit well with Koreans,” he said. “We started a seminar in 1985 in Seoul and started short-track races.”

However, he also criticized the Korean Skating Union for losing a “diamond” athlete, Ahn Hyun-soo, now a Russian player named Victor Ahn, due to factionalism.

“Skeleton, bobsleigh and curling were the fields we didn’t think our athletes would compete in, and how exciting it is to see our athletes playing,” he said. “The fact that we are going to host the Winter Olympics in Pyeongchang in 2018 and we are participating in various fields that are already more than halfway through.”