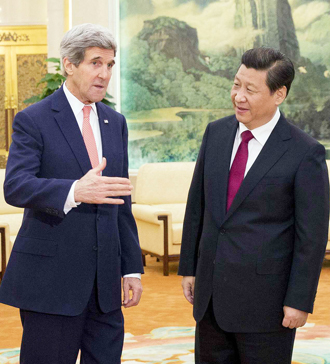 U.S. Secretary of State John Kerry, left, meets with Chinese President Xi Jinping yesterday at the Great Hall of the People in Beijing, his second stop in Asia after Seoul. He stayed in Korea for two days. [AP/NEWSIS]

During his two-day stay in China before departing for Indonesia’s capital of Jakarta today, Kerry was expected to seek support and cooperation from senior officials to pressure North Korea into returning to nuclear disarmament talks.

Kerry’s intention was underscored during a joint press briefing Thursday night with his South Korean counterpart Yun Byung-se at the Ministry of Foreign Affairs in Seoul.

“Automobiles come from China, significant trade goes from China to North Korea,” said Kerry, adding that he will tell the Chinese leadership that the U.S. “cannot wait till the North has either gone so much further in its program that it’s even more complicated to deal with, or created a provocation that incites a response that creates even greater problems of security.”

He continued, “Our belief is that China can do more now to urge North Korea to begin taking action to come into compliance with its international obligations.”

The 70-year-old Kerry made clear that the United States will not accept a nuclear-armed North Korea and noted that Pyongyang must show its commitment to denuclearization before engaging in talks, reiterating the Obama administration’s long-held position that the North must show sincerity about nuclear disarmament.

“The United States will not accept North Korea as a nuclear-armed state, we will not accept talks for the sake of talks and the DPRK must show that it will live up to its commitments.” DPRK is the acronym of North Korea’s official name, the Democratic People’s Republic of Korea.

During the press conference, Kerry also touched on relations between Seoul and Tokyo, which have been strained in recent months due to long-held territorial and historical disputes. He called on Seoul and Tokyo to mend strained ties amid a growing need for cooperation to deal with an unpredictable Pyongyang.

“It’s up to Korea and Japan to put history behind them and move the relationship forward,” said the former presidential candidate for the Democratic Party. He noted that it is “critical to maintain robust trilateral cooperation” in the face of North Korea’s potential provocations.

Kerry’s remark, however, sparked a protest from a lawmaker, claiming such a view of Seoul-Tokyo relations “might have come from his lack of understanding of peculiar historical issues” between the two countries.

“We also desire Korea-Japan relations to be future-oriented,” said Representative Hong Moon-Jong, of the ruling Saenuri Party, before reporters at the National Assembly yesterday. “But such relations can only be built with Japan’s sincere apology [for its 1910-45 colonial occupation of the Korean Peninsula] and an end to its continuing history distortions.”

Tension between Seoul and Tokyo, whose relations hit a low amid a series of territorial and historical feuds, flared up again recently with a remark by Japanese Prime Minister Shinzo Abe, who said he recognized Ahn Jung-geun, an independent activist widely revered in Korea for assassinating Japan’s first prime minister Ito Hirobumi in 1909, as a person who committed murder and was executed for his crime.

Following his meeting with President Park Geun-hye at the Blue House Thursday, Kerry, drew media attention during a 10-minute visit to Tongin Market in central Seoul to get a whiff of local culture, which Kerry is known to have an interest in. During his brief stay, Kerry ate tteokbokki, or rice cake seasoned in pepper paste.

Kerry’s visit to Seoul this week came at a time when the two Koreas held unusual high-level talks on the reunions of families separated during the 1950-53 Korean War and other inter-Korean issues.