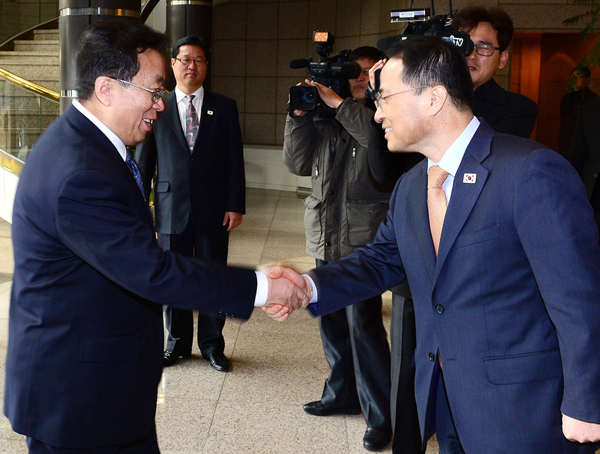 The two Koreas agreed to hold reunions of war-separated families as scheduled next week, without canceling or delaying the South Korea-U.S. joint military drills that North Korea has objected vociferously to.

High-ranking officials from both Koreas had a second series of meetings at the border village of Panmunjom yesterday following inconclusive talks on Wednesday and reached a deal to hold the reunions as scheduled between Feb. 20 and 25.

“First, South and North agreed to hold the reunions,” Kim Kyou-hyun, South Korea’s chief negotiator, said at a briefing. “Second, both sides agreed to stop slander and insults against each other to enhance mutual understanding and trust.”

“We decided to make active efforts to develop inter-Korean relations through continuously negotiating mutual interests and holding a further meeting of high-ranking officials on a convenient day for both sides,” he said.

“Although we confirmed differences between the two sides over current affairs, we both recognized the necessity of improving inter-Korean relations and holding the reunions without any changes through long hours and frank talks,” Kim said. “Through a high-ranking meeting held for the first time under this [Park Geun-hye] administration, we think it is meaningful to take the first step for the development of inter-Korean relations based on trust.”

North Korea finally backed off from its previous demand that the military exercises be canceled.

“But we said we can’t accept the claim and that they are two separate matters and made the North accept our position.”

Kim said that North Korea “made a broad decision.”

“As we repeated the word ‘trust,’ the North Korean side said, ‘If you say so, then we will trust you,’?” Kim told reporters at the briefing.

On Saturday, North Korea’s powerful National Defense Commission, chaired by leader Kim Jong-un, abruptly proposed a meeting between high-ranking officials. The commission requested a Blue House official lead the South’s team, not a Unification Ministry official as would usually be the case.

It has been seven years since a Blue House official attended talks with North Korea.

During the first series of talks at the border village on Wednesday, North Korea demanded that the South cancel or delay its joint military exercises with Washington, which coincide with the reunions.

The drills, called Key Resolve and Foal Eagle, are scheduled to take place in South Korean territory starting Feb. 24 and will run until April 18. The two allies say the drills are defensive, but Pyongyang say they are rehearsals for war against the North.

After the talks on Wednesday, North Korea proposed additional discussions on Thursday, and South Korea accepted.

During the talks, the South also promoted President Park’s “trust-building process” for relations with North Korea.

“Our side gave a full explanation of the purpose and the idea of the trust-building process to the North, and the family reunions will become the first step for it,” Kim said.

The last reunions of families separated by the 1950-1953 Korean War took place in October 2010, under the Lee Myung-bak administration. Since then, following North Korea’s deadly shelling of South Korea’s Yeonpyeong Island in November 2010, no further reunions were held.

According to the Ministry of Unification, which is in charge of the reunions, a total of 170 South and North Korean family members will meet during the six-day reunions held at the Mount Kumgang resort in North Korea.

More than 50 percent of the people registered as separated family members by the government are in their 90s, and they’re running out of time to see their relatives before they die.

As of July 2013, 55,960 out of 128,842 applicants for the reunions died. Through the 17 official reunions arranged by the governments, only about 18,000 South and North Koreans were reunited. About 53,000 people in South Korea have discovered the whereabouts of their relatives through confirmations by North Korea.

According to the Ministry of Unification, a delegation of 15 officials will be sent today to Mount Kumgang for safety checks in advance of the visits of the aging family members.

According to the Unification Ministry, both sides arranged a detailed schedule for the six-day reunions, divided into two three-day sessions. A total of 84 South Koreans will attend a meeting and luncheon with their North Korean relations, arranged by North Korea on Feb. 20. The next day, they will have two-hour individual talks and group lunches. On the third day, they will say farewell in the morning and return home.

In the second session, 86 North Koreans will visit the resort on Feb. 23 and follow the same schedule, arranged by South Korea. The two Koreas were supposed to hold reunions in September 2013, but North Korea called them off four days before the event.