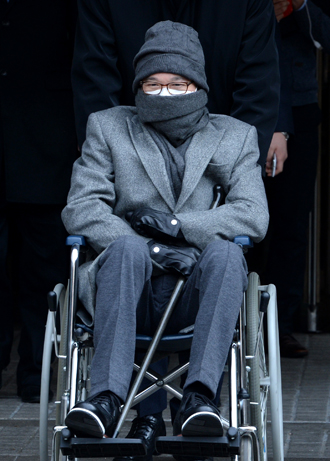 CJ Group Chairman Lee Jay-hyun leaves the Seoul Central District Court yesterday in a wheelchair after being fined and sentenced to four years behind bars. [NEWSIS]

“The defendant avoided paying taxes amounting to 26 billion won by wielding his influence as the biggest shareholder [in CJ Group],” said presiding judge Kim Yong-gwan during a verdict deliberation at the Seoul Central District Court.

The judge added that Lee created slush funds worth nearly 60.3 billion won for personal use through misappropriation of company funds in a systematic and secretive way. The court also accepted the prosecutors’ claim that Lee created paper companies offshore to transfer his illegally amassed fortune to their accounts in order to avoid paying taxes.

“Considering the defendant’s high responsibility within CJ Group, as well as in society, it is inevitable for a court to demand him take responsibility [for his misdeeds],” said the court. It also said the disgraced mogul’s crimes have impeded the overall growth of CJ Group and damaged its image.

Lee’s defense team claimed during the course of the trials that he had only amassed piles of cash to use for the benefit of the conglomerate, a claim the court yesterday rejected.

The prosecution asked the court to give Lee a six-year prison term and a fine of 110 billion won, alleging that the 54-year-old businessman had embezzled 71.9 billion won from corporate funds.

The court spared Lee from being sent to prison straight from the courtroom, however, citing his ailing health and saying he didn’t pose a risk of flight. Lee, who was wheeled into the court in a wheelchair and wearing a face mask, didn’t answer questions from reporters when he left the court.

Lee was placed behind bars in July after he was indicted by the prosecution on charges of massive tax evasion and embezzlement. But he got out of jail in less than a month because he was granted a detention suspension in August for poor health.

He received a kidney transplant following the release.

Lee is expected to request another confinement suspension in coming days.

Particular attention has been paid to the CJ case and whether the court would suspend a jail sentence for Lee. The owners of Hanwha and LIG groups, two large conglomerates, both received three-year prison terms suspended for five years in an appellate court on Tuesday.

The court’s decision to release Hanwha Chairman Kim Seung-youn and LIG Group Chairman Koo Cha-won from jail sparked speculation that courts had returned to their tradition of treating chaebol owners with kid gloves, even when they were convicted of serious white collar crimes.

But the tough verdict for Lee suggests some courts want to be tough on the lawbreakers.

Lee’s defense team expressed disappointment and indicated that it will appeal the ruling.