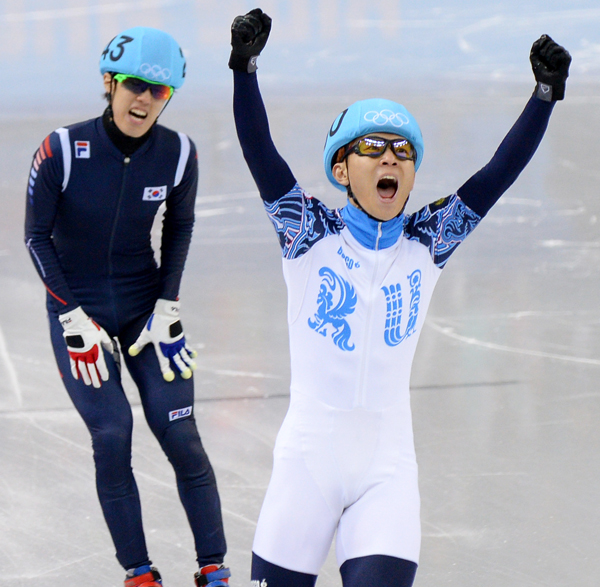 When Ahn Hyun-soo, aka Viktor Ahn of Russia, crossed the finish line first in the men’s 1,000-meter short track speed skating final, the Iceberg Skating Palace in Sochi reverberated with the cheers of a Russian crowd celebrating their country’s first Olympic gold in the sport.

Ahn earned unstinting praise even from fans of other countries for his dominant performance, but Koreans - from Shin Da-woon, who competed against Ahn in the final but failed to medal, to team Korea’s coaching staff to fans who watched on TV - could only smile.

In Saturday’s final, the 28-year-old crossed the finish line in 1:25.32 for his first gold medal since winning three at the 2006 Turin Winter Olympics. Ahn’s teammate Vladimir Grigorev won the silver, followed by Sjinkie Knegt of the Netherlands in third.

Expectations of a gold medal for Korea in the 1,000-meter race were high because the country has dominated the event. Kwan Yoon-ki holds the world record with a time of 1:23.007, and Lee Jung-su has the Olympic record of 1:23.747.

But after Lee Han-bin failed to advance to the final after receiving a penalty for interfering with a competitor in the semifinals and Shin was penalized in the final, angry fans started blaming the Korea Skating Union, which is seen as the main reason the country’s best skater changed his nationality.

Within an hour, the website of the union was overwhelmed with messages that read, “Hey you in the high-ranking position in the union, how do you feel about losing a competition to someone who was fostered under your system?” and “I can’t wait to see this stupid organization be totally reformed after the Olympics.”

The website eventually went down due to high traffic and stayed down all day yesterday.

The union has been blamed whenever a Korean skater has struggled, regardless of the reasons.

In April 2006, Ahn’s father told the media that his son’s teammates had attempted to prevent him from winning gold medals in international matches under orders from the team’s coach. He claimed the divide was rooted in fierce university loyalties - Ahn is a graduate of the Korea National Sports University, the country’s leading short track program - but some in the union wanted athletes from other universities to win international matches.

After a series of twists and turns, Ahn decided to become a Russian to continue his career.

After a short celebration, he knelt down with tears flowing and kissed the ice.

His father and his girlfriend, Woo Na-ri, who were at the venue to see the final event, wept as well.

“I have been working hard the past eight years for this moment,” Ahn told reporters after the race.

“It was a very hard time for me, and I think this is the reward for what I have done. These tears explain exactly the past eight years.” 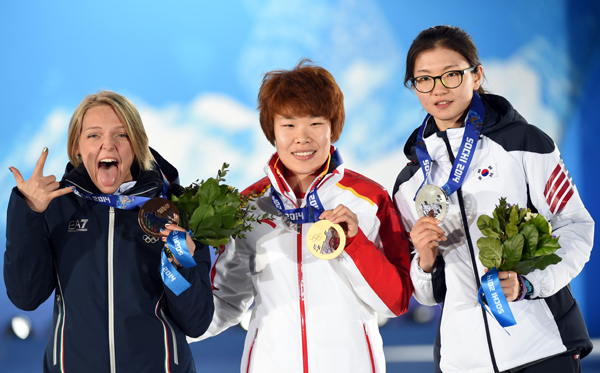 From left: Arianna Fontana of Italy, Yang Zhou of China and Shim Suk-hee of Korea receive their medals during the presentation ceremony for the 1,500-meter short track speed skating event. [USA TODAY/NEWS1]

When reporters asked about the struggles with the skating union and his nationality issue, he said, “Now isn’t the right time to speak about it. I will tell everything after the Olympics.”

Russia, a strong nation in winter sports, had never claimed a gold medal in short track. Russian sports officials said before the Olympics that they aimed to win three gold medals in short track by adding Ahn to their team.

“I’m very happy that my son was going to another Olympics, but I also was sad that he wasn’t representing his mother country,” said Ahn Ki-won, Viktor’s father. “He hasn’t mentioned how he feels about that because he worried about me feeling sad, but he one day told me that it would make him feel regret when he sees the national flag of Russia top taegeukgi [Korean flag] if he beats Korea. I think it just explains everything.”

“Russia persuaded Hyun-soo to skate for Russia when he was injured in January 2009, saying they would take care of my son’s entire rehabilitation,” he said. “He decided to represent Russia after staying about one year there, but some people in the skating circle wanted to prevent him from going to Russia by saying to other people that my son wasn’t as good as he used to be.”

He received excellent support from Russia, which he never had in his mother country. The Russia Skating Union gives him a salary of $120,000 per year and pays for his living expenses, including housing.

“People in Korea often put my son under huge pressure, telling him no one remembers runners-up,” the father said. “But people here [Russia], including members and staff of the national team, celebrate together regardless of outcomes and respect each other’s performance. Such circumstances led my son to just focus on his skating.”

After the Olympics, Ahn will compete in the World Short Track Championship next month and continue his career in Russia.

“He will be 33 by the time of the 2018 Pyeongchang Olympics, but he is considering competing in the event because it is staged in his mother country,” his father said.

“I feel sorry for not winning the gold in my favorite event for the country,” Shim said. “But I’m proud of what I have done and I will continue to do my best in the remaining events.” Shim will compete in the 3,000-meter relay tomorrow with her teammates including Park Seung-hi, the bronze-medal winner of the 500 meters.