Publisher in India recalls and destroys book on Hinduism

Publisher in India recalls and destroys book on Hinduism 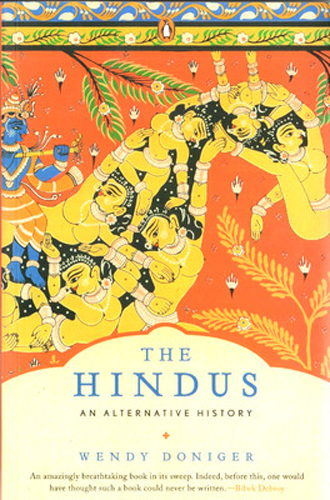 NEW DELHI - Penguin Books India has agreed to withdraw from sale all copies of a book that takes an unorthodox view of Hinduism, and will pulp them as part of a settlement after a case was filed against the publisher, the petitioners’ lawyer said.

“The Hindus: An Alternative History” by Wendy Doniger, a professor at the University of Chicago’s Divinity School, was published in India in 2011.

Its depiction of the religion drew criticism from both conservative Hindus and some scholars.

Penguin on Monday agreed in the Saket Court in Delhi to recall the book, the petitioners’ lawyer, Monika Arora, said.

What appeared to be a copy of the court agreement was widely circulated on the Internet on Tuesday.

A complaint was filed by seven petitioners in the court in 2011.

Penguin did not respond to several requests for comment.

The lead petitioner’s original complaint criticized the book for “heresies and factual inaccuracies” and blasted Doniger for having a selective approach to writing about Hinduism.

“She denounced the Hindu gods and freedom fighters of India,” the petitioners’ lawyer Arora told Reuters.

A group headed by the lead petitioner has previously made complaints about diverse subjects including sex education in schools and a magazine article about Hindu militancy.

The book’s withdrawal triggered anger on Twitter, rekindling a debate on freedom of speech in the world’s largest democracy.

“The ‘offended’ prevail over freedom of speech. Surely God’s too great to be so easily upset?” tweeted Meenakshi Ganguly, the South Asia director of New York-based Human Rights Watch.

It was not the first time a book has been banned in India.

Salman Rushdie’s 1988 novel, “The Satanic Verses,” which many Muslims deemed blasphemous, is proscribed due to its depiction of Islam.

The BJP is the frontrunner in national polls scheduled to take place by May.

The notice also said that Doniger incorrectly tells readers that the RSS was behind the 1948 assassination of Mahatma Gandhi, India’s freedom hero, saying that a judicial commission had exonerated the RSS of any complicity in Gandhi’s murder.

Gandhi was shot dead by a former member of the organization.

In a separate incident last week, Hindu hardliners burned copies of an Indian magazine because of a story which quotes a Hindu nationalist leader as saying that Mohan Bhagwat, who leads the RSS, had sanctioned deadly attacks on Muslims.

The RSS has denied the allegations against Bhagwat.