Ranger gets leadership lesson at bottom of world

Ranger gets leadership lesson at bottom of world

Rachael Robertson led a large, 12-month expedition in Antarctica, where two Adelie penguins, left, stand on a block of melting ice atop a rocky shoreline, while Weddell seals lie atop the ice at Cape Denison. [REUTERS/NEWS1]

SYDNEY - At age 34, Rachael Robertson accepted the biggest challenge of her life: to lead a large, 12-month expedition in Antarctica. Two months on, she found herself having to ask the team of 120 how they managed to get through a year’s supply of condoms in just eight weeks.

Robertson, a former chief ranger for the national parks service in Australia’s Victoria state, spoke to Reuters about her book “Leading on the Edge” and how she developed a unique style of leadership using a technique called “no triangles.”

She also recounted some of the funnier moments in Antarctica, including an elephant seal breaking wind during a minute’s silence on Anzac Day, a solemn time to remember Australians and New Zealanders who died in wars and conflicts. 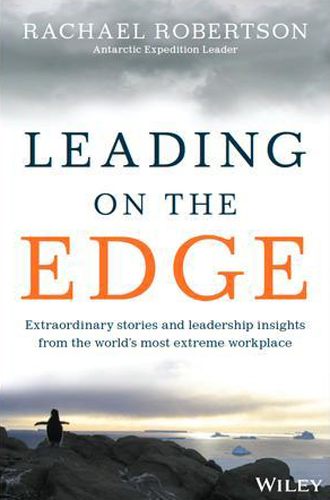 Q. Many people have written about their experience in the frozen south - what’s different about your story?

A. Mine is a leadership book, it’s not a memoir. It’s based on my journals. I’ve taken what I learned and applied it to any workplace anywhere in the world.

Antarctica is traditionally a very “blokey” - almost a “command and control” and military style - where what happens on station stays on station.

I went down with a different mind-set - I’m going to take a corporate leadership mind-set, like zero tolerance for bullying or harassing and coaching my people on how to communicate with each other.

You’ve got to deal with it immediately and you’ve got to do it on your own. You can’t have a meeting with Human Resources and talk about it for a few days.

It’s such a pressure-cooker environment, you can’t ignore things. That’s the main difference.

That’s where I implemented “no triangles” - a two-way system of confronting an issue respectfully. I think corporate life could learn from this. Respect is more important than harmony.

You refer to being aware not to challenge the Australian Antarctic Division by implementing a new leadership style. How did you manage this?

It was tough because they knew my style of leadership was collaborative. They actually said “you’re not running a democracy down there.”

I said that if I don’t use the knowledge and experience of the people around me, someone could get killed.

In one of the manuals you found instructions on how to cook a penguin. Were you ever tempted to cook one?

It’s still in the current survival guidebook. No, I wasn’t tempted to cook a penguin.

We had the opposite problem as we had a fantastic chef. Weight gain is a big issue because you can’t just go down to the shop and buy a bigger size.

What are some of your funnier memories?

We went through 2,000 condoms with 120 people in eight weeks. Getting pregnant down there is pretty drastic. My take on it is we had a lot of students there for the summer and they saw the opportunity to take a few back home to Australia.

Having to stand up and talk to my staff about condoms was one of those surreal moments in my career.

You celebrated momentous occasions, like Anzac Day. What was different about that day?

Anzac Day was fantastic because sunrise is at 10 a.m. I think it’s very civilized to have our “dawn service” at 10.

We wandered out to the flagpole, read some poetry and played “The Last Post.” Right in the middle of our minute’s silence, an elephant seal farted. You just think “Ah, it’s Antarctica.”

You are faced with many dangers on a daily basis. What is one of the more unusual ones?

Fire. If a fire started and we lost our shelter, you are dead .?.?. Also, water is such a precious resource that even a little fire is a real threat because you can’t get water in winter, so whatever we get in summer has to last us. It takes a lot of diesel fuel to melt ice.

Did you ever feel you were intruding on nature?

Yes, there was a classic moment when the most beautiful penguin I had ever seen blocked my pathway.

His feathers were silken and shiny and his colors shone in the low sun. I looked at him and said, “Dude, you are in my way.” I’m sure I heard him say, “Dude, you’re in my home, I was here first.”