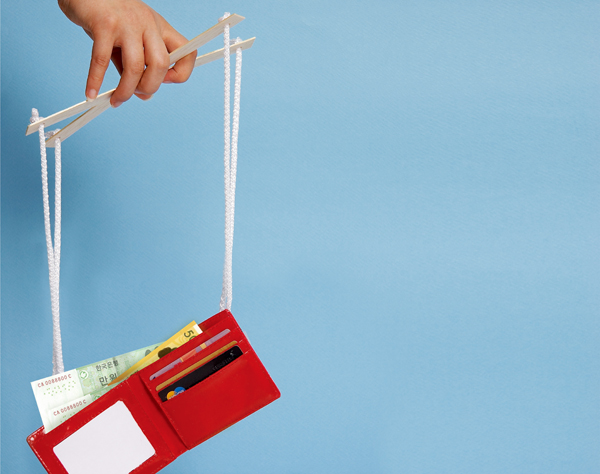 At a time of record-breaking household debt, half of the lower-income households use loans to meet their daily living expenses.

A study by the Hyundai Research Institute released yesterday found that 52 percent of lower-income families’ debt goes to buying necessities and pay bills.

Furthermore, 26 percent of the debt borrowed from such households was used for education. This is a stark contrast to upper-class households, where the largest portion of debt, or 35 percent, was used to buy real estate.

Until now, although debt has been persistently rising since the global financial crisis of late 2008, the government downplayed the risk to financial markets because most household debt was generated by the upper class to buy real estate. 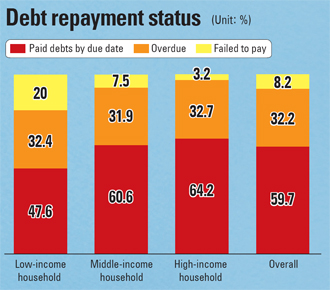 Yesterday’s report, although confirming the debt burden on upper-income households has eased, indicates the situation has only gotten worse for families on the other end of the spectrum.

The biggest reason behind the rising debt burden turned out to be a slow expansion of income.

Borrowing by lower-income households at financial institutions grew 2.2 percent from 25.8 million won in 2012 to 36.7 million won in the following year.

However, disposable income during the same period shrank 5.4 percent, from 9.3 million won to 8.8 million won.

As a result, their debt accounted for 414.8 percent of their annual disposable income last year, compared to 276 percent in 2012.

In other words, the burden of debt repayments for lower-income households is much heavier than that of middle- and upper-income families.

The debt interest payment burden of lower-income households also has increased, whereas that of middle- and upper-income families dropped during the same period.

It was the same for upper-income households, whose debt interest payment from 8.2 percent of disposable income to 7.6 percent.

“The upper- and middle-income classes are paying up their principal, which is easing their debt burden,” said Kim Kwang-seok, an analyst at Hyundai Research Institute. “The situation for lower-income families is concerning, as they could be stuck in a vicious cycle because the amount they are borrowing to pay for their living expenses is increasing at the same time their interest burden is rising.”

Kim particularly noted that the lower-income families are struggling to repay their debt on time since most of their debt are used for living expenses with no additional income.

Among lower-income debtors, who are late on their payments, 44 percent blamed it on their lack of income.

In particular, measures for lower-income classes should be targeted at improving their income by offering stable and secure jobs, attracting them to less burdensome debt programs to improve their credit ratings and adjusting their debts.