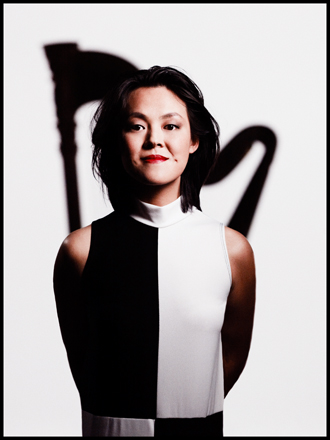 Meijer, who was adopted when she was 2 years old, recently visited her birth country to perform several concerts and promote her latest album, “Passagio.”

She visited Korea for the first time in 2009 to meet her biological father, saying that “musicians get better when they are also growing as a person.”

“What you experience in your personal life, you bring with you in your profession, in music,” said Meijer. “For me, meeting my biological father was one of those personal experiences. That’s when I started to hear and perceive music in a freer way. I was growing and growing and, suddenly, I was there. It was a big step for me toward adulthood.”

Meijer met her father once more after 2009 and continues to stay in contact with him via email.

“Since there’s a language barrier, I have someone who translates my Dutch to Korean, so I can send emails to him, and I get the Korean email I receive from my father translated into Dutch so I can read it,” said Meijer with a giggle. “It seems to be working all right.”

“Passagio” is her fifth album, but her first through Sony Classical. It showcases Meijer’s transcriptions of the music by Italian composer and pianist Ludovico Einaudi for the harp. The album, she said, brought her “this freedom and this experience of life into Einaudi’s music.” Einaudi, 51, is best known to Koreans as the composer of the soundtrack to the French movie “The Untouchables” (2011).

Meijer was adopted to the Dutch family together with her brother, who is two years older.

“My family is quite unique,” she said. “My father is the only fully Dutch person in the family. My mother is Austrian. They decided to have one child themselves to experience what it’s like to give birth. After that, they wanted to adopt, so then came me and my biological brother. Two years later, they adopted another boy from Ethiopia, so we are a very colorful family.

“My parents are no musicians, but both me and my biological brother were. He also plays quite a unique instrument, which is the bagpipe. Maybe when we were children in Korea, my brother heard the Korean flute, and I listen to the gayageum [traditional Korean zither-like instrument] that became the harp and the bagpipes in the Netherlands.”

Meijer began playing the harp at the age of 9. Within two years, she was admitted to the young talent class at the Utrecht Conservatory and later she attended the Conservatorium van Amsterdam. In 2009, Meijer received the Dutch Music Prize, the highest distinction for a classical musician in the Netherlands.

Although still young, Meijer has already played on stages all over the world - in Vienna, New York, Cologne, Amsterdam, Paris, Stockholm, Birmingham and Seoul. Meijer says her goal is to attract audiences around the world to classical music and familiarize them with the harp as a solo instrument.

“What I liked about the harp was that it came to me as a mysterious instrument with such a pure sound,” she said. “It was not well known, so it was very unique. But having a unique instrument, you also have the reality that it’s not that well known. Concert programmers, they are a bit afraid to program a solo harp concert because they think it might be boring or people will not come to a harp concert.

“When I was about 15, there was a concert programmer who called me and said I could do a concert, but I should bring a violinist or a flautist with me because harp just by itself is quite boring. It actually made me quite angry.”

Meijer said she had faith in her instrument, and spent 30 minutes on the phone persuading the programmer to stage a solo concert.

“I believe the harp can be an all-around instrument, just like the piano. It has so many things to show,” said Meijer. “After the concert, the concert programmer came to me and said, ‘You were totally right.’”

Meijer says she never stops thinking about how to let people know about the beauty of the harp as a solo instrument.

“I joined a network where people from different professions come together to introduce themselves and have presentations,” she said.

“For me, it was an experience where I could find out how people from all different professions look at the harp. I found out that they have stereotypes about the harp. Often, when people hear the harp, they think about waterfalls, and the music is so soft and angelic that only a slim girl with beautiful long blonde hair can play it. But that’s not true. It’s not a light instrument. I had to build muscles in my arms to play this instrument.”

Besides performing classical repertoires, Meijer has collaborated with different genres of music, ranging from electronic and theatrical to contemporary and jazz. Her 2012 take on Philip Glass’s “Metamorphosis” was highly praised.

“I try to show a lot of different styles on the harp. I can do both Baroque and Romantic classical music on my harp, but I can also do modern music with a lot of effects and big volumes,” said Meijer. “When I was on national television showing that, I got a lot of responses from people saying that they’ve never believed that a harp could do that.”