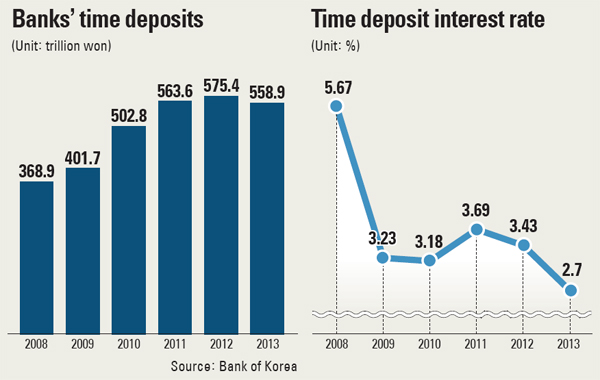 Kim, 35, has been having second thoughts about renewing her time deposit at Shinhan Bank when it matures in two to three months.

“When I look at the low interest rate, it makes me wonder if I should just take that 20 million won ($18,804)that I have and invest in something with higher interest,” Kim said.

“But then there aren’t many options, considering how the stock market has been struggling recently and the amount I have is too small to invest in real estate.”

For the first time in eight years, banks’ time deposits have shrunk as the central bank maintains its loose monetary policy.

According to data provided by the Bank of Korea, time deposits as Dec. 31 stood at 558.9 trillion won, down nearly 3 percent, or 16.8 trillion won, from the previous year.

Time deposits last declined in 2005, when they fell nearly 3 percent in the aftermath of the credit card default crisis.

Even for overall deposits, growth has been slow. Last year, overall bank deposits - including savings accounts - grew 2 percent to 1,009.7 trillion won. The last time there was slower year-on-year growth was 0.1 percent in 2007.

The biggest reason seems to be loose monetary policy.

With interest on deposits so low, investors looking for higher returns have shifted to non-banking financial institutions such as savings banks and insurance companies whose interest rates on financial products usually exceed 3 percent. Deposits at non-banking companies grew more than 7 percent year-on-year to 1,576 trillion won.

Although the global market - particularly in advanced economies - is showing signs of improvement despite jitters in emerging markets, the Korean central bank last week kept the its benchmark rate at 2.5 percent.

“We do not expect the central bank to change its policy rate on current emerging market uncertainties alone,” said Ronald Man, an economist at HSBC, last week after the monthly meeting. “Instead, Korean officials will likely try to calm markets by stressing that they will continue to closely monitor movements in global financial markets.”

The HSBC economist projected the Korean central bank will hold the rate at the current level until raising it 0.25 percentage point in the third quarter.

The central bank, in support of the government’s campaign to stimulate the economy, lowered the key borrowing rate from 2.75 percent to 2.5 percent in May. Since then it has kept the rate at the same level for nine consecutive months.