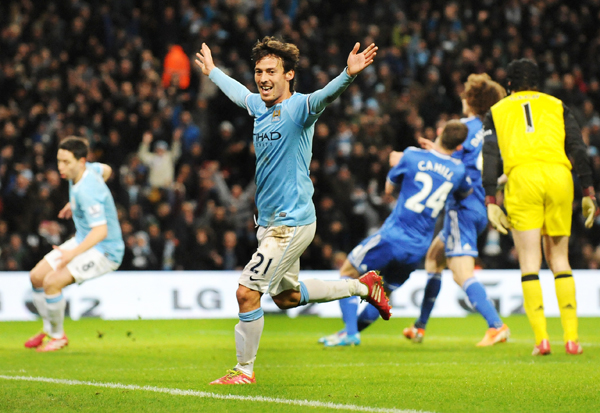 Stevan Jovetic and Samir Nasri provided the goals to avenge a 1-0 league loss this month, with a formidable City in complete control and preventing Chelsea from hitting the target once.

“We can beat everyone,” Jovetic said. “We learned something [from losing to Chelsea], you could see that on the pitch.’’

Although Chelsea leads the league, City is only three points behind in third with a game in hand after its midweek game was postponed due to bad weather.

Sunderland also advanced in the FA Cup, with Craig Gardner clinching a 1-0 victory over Southampton.

Wigan maintained its cup defense by winning, 2-1, at Cardiff, with Ben Watson, whose goal clinched the cup before the team was relegated from the topflight last May, netting the winner in south Wales.

With City hosting Barcelona in the Champions League on Tuesday, beating Chelsea showed the enviable depth of resources at Manuel Pellegrini’s disposal.

Jovetic, who is City’s fourth-choice striker despite being signed last year at a cost of 24 million pounds ($40 million), first came close when he struck the crossbar from the rebound after goalkeeper Petr Cech fumbled Yaya Toure’s strike.

Jovetic hit the woodwork again in the 16th minute, but the ball went over the line as City ripped through a Chelsea defense missing captain John Terry.

David Silva played in Edin Dzeko, who sent the ball out for Jovetic to strike off the post into the bottom left. It was just Jovetic’s sixth goal of an injury-hit start to his City career.

City was far more assertive and cohesive than the side that was beaten here by Chelsea less than two weeks ago, with Dzeko also testing Cech with a curling shot.

“We wanted revenge today,” said City captain Vincent Kompany. “Twelve days ago we had a really bad game, we gave them a lot of chances.”

“I had a lot of questions after Chelsea, if we’re going to change our way of playing,” Pellegrini said, referring to the 1-0 loss. “But I repeat: We will not change the way we play.”

Chelsea can only win on two fronts - the Premier League and Champions League - and Jose Mourinho’s side has the edge over City domestically, having won both league encounters.

“We were never close to scoring or being dominant, or bringing a scare to the game,” Mourinho said.

“Today there was a different freshness between the teams ... and one team had a week without professional football,” he added.