Why I envy the Fed chairwoman

Why I envy the Fed chairwoman 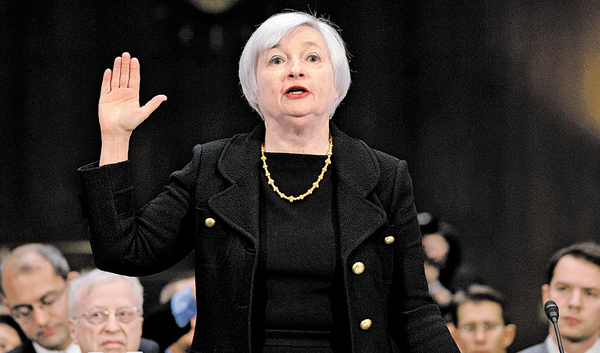 Stock prices can get a “CEO boost” when a company or organization names a competent leader. But good leadership is not limited to CEOs. Janet Yellen proved that the chair of the Governors of the U.S. Federal Reserve can also boost the stock market. After she declared “a great deal of continuity” in Fed policy at her first public appearance at the congressional hearing on Feb. 11, stock markets soared worldwide in praise of the arrival of Yellen’s era.

However, Yellen’s successful debut is not just her accomplishment. It was bolstered by the sophisticated political system to select the Fed chair. The process of selecting a successor to Ben Bernanke began half a year ago. Two individuals were considered: Larry Summers, former director of the White House National Economic Council for President Barack Obama, and Janet Yellen, vice chair of the Fed.

They were verified, supported and opposed by various groups. Summers sent a letter to the administration saying he would withdraw from being considered for the position. The decision came after three Democratic senators openly opposed his confirmation. Even if he was confirmed, he knew that the confirmation process would be “acrimonious” and “would not serve the interest of the Federal Reserve.”

In the end, President Obama nominated Yellen in October, 2013. But Yellen still remained as No. 2 in the Fed, breaking the expectations that Bernanke’s influence would be undermined after the successor was named. Bernanke presided over three Federal Open Market Committee meetings, showing his influence. He personally managed the tapering of quantitative easing at the end of the year.

Yellen was confirmed at the Senate and became the first woman to hold the position in history, but she kept her voice down. Thanks to her low profile, Bernanke managed to complete his tenure without a lame duck session. And it served Yellen well. With Bernanke’s full support, she smoothly took over the complicated organization.

Frankly, I envy Yellen’s rise to the Fed chair. It took six months for a candidate to be discussed, nominated and confirmed. The power that makes the chair of the Fed the economic leader of the world doesn’t simply come from the authority to print dollars. The U.S. Congress, Wall Street bankers and businessmen support the Fed chair.

As Summers withdrew and Yellen became the sole candidate, the White House contacted each Democratic member of the Senate and asked for his or her support. If the Fed chair becomes a target of political attacks before inauguration, she would not be able to display the solid leadership the position calls for. How about Korea? Bank of Korea Governor Kim Choong-soo’s term expires at the end of March, but we still haven’t got a clue who the successor would be. Will we get a governor who is appointed by the president out of the blue?

*The author is the New York correspondent of the JoongAng Daily.