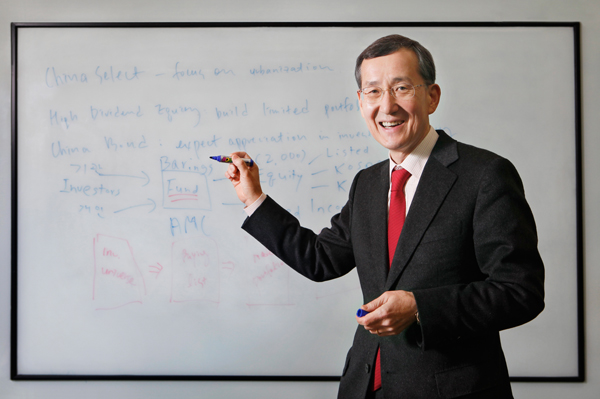 Thae Khwarg, CEO of Baring Asset Management Korea, is a conservative and logical financial expert on the Korean stock market, thanks to his background as a lawyer.

Khwarg grew up in a business-oriented family and established a corporate mind-set at an early age. When he was 13 years old, he and his family emigrated to the United States.

Khwarg honed his business sense at his father’s companies. He studied history and law, and became a lawyer dealing with securities and financial transactions at major companies in New York and Hong Kong.

With his reputation growing in Hong Kong, Khwarg chose to return to his home country in the early 1990s.

Leading the Seoul branch of the London-based financial institution for the past year, Khwarg has been recognized for expanding the range of financial products for domestic investors.

“The biggest secret is to stick to what you bought for the long term,” he said in an interview with the Korea JoongAng Daily last month. “Being in a fund for the long term is always helpful, as is diversifying and rebalancing your portfolio.”

The lawyer turned investor, who describes himself as “conservative,” forecasts the Korean securities market will have a good year due to a growing global recovery and safer corporate stocks. Khwarg also shrugged off concerns about the impact on the Korean markets of possible currency crises developing in emerging markets.

Barings’ activities in Korea go back to the 1980s, when it participated in syndicated loans and direct lending. In the early 1980s, the rapid growth of the Korean economy and liberalization of the market allowed Barings a greater role as an arranger and underwriter of capital market transactions. A group representative office opened in 1986 in Seoul, and Barings was responsible for 10 percent of all overseas investments into the Korean market at the time, according to the company.

It opened an office in Seoul in 2008 to serve Korean distributors needing help with the sale of offshore funds. In early 2013, Barings acquired SEI Asset Korea, which helped expand its presence in Korea. 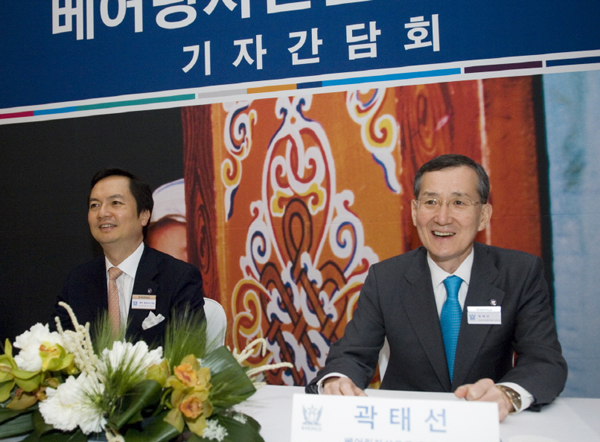 Khwarg speaks at a press conference to celebrate the opening of the Seoul branch of Baring Asset Management Korea in 2008. Provided by the company

Q. Why did you decide to change your career path, and how did the law background help your financial career?

A. I was interested in business all my life. My family emigrated to the United States when I was 13 years old. My father ran small businesses like a gas station, a Taekwondo studio and a gift shop. On the weekends, I always helped my father. I had a strong interest in business. Even after graduating from law school, most of my work was with business-related law. My first case was a lawsuit between two airline companies.

After working at a law firm in New York for two years, I went to Hong Kong because legal work in Korea was developing and the Chinese economy was opening up. I came to Hong Kong in 1986 and met many people in the securities industry. At the time, the Korean stock market was just opening to foreign investors. It was somewhat natural for me to be in the financial industry, but when I had to make the transfer from being a lawyer outside the country to doing research on the Korean stock market, it felt like a very big adjustment.

Reading Korean newspapers every morning taught me a lot. Initially, I didn’t understand much of the financial ratios people looked at, like the price to earnings ratio. In the financial world, we like to use seemingly difficult words, like acronyms.

Lawyers are very different from people in the financial world. Lawyers expect there to be perfect answers for every situation. Financial people know there are no right answers to a lot of situations, so they are more flexible in their thinking.

Because of my legal background, I tend to be more conservative in terms of risk management.

[The Financial Supervisory Service (FSS) announced Friday that an executive and employee of Baring Asset Management were warned for inappropriate practices in risk management, including turning 32.7 billion won deposited in normal accounts into $29 million in foreign exchange accounts between April and July and as many as 162 instances of late or omitted notifications to the FSS from December 2010 to February 2013. “We take the FSS warning seriously and will take this chance to further enhance internal control and management,” said a company spokeswoman.]

Although Barings has a very long history, it remains quite new to Korean consumers. Can you introduce the company to our readers?

We have a 250-year history. Barings was the major banker for financing the U.S. Louisiana Purchase, when the United States doubled its territory, by issuing bonds.

At the time, the United States was an emerging market, too. Barings underwrote all the bond issuances. In the past 34 years or so, Barings was known to be an expert on emerging markets. So, for example, when I was heading Baring Securities in 1988, we were a pioneer in the securities market in Korea.

Having Barings come back to Korea means that we were a strong part of internationalizing the Korean market. So Baring Asset Management specializes in finding unrecognized growth in emerging markets, multi-asset strategy and fixed income strategy. With these three areas, we have $60 billion under accessible management. We have a very strong presence in Asia, having one-third of our total staff in Asia, although the group is headquartered in London.

In Korea, Barings’ flagship funds on the domestic side are the High Dividend Equity Fund, which recorded returns of more than 20 percent last year. We also have the Baring Value Fund. We are going to launch a Korea Select Fund that invests in a smaller number of stocks that have high growth potential and turnaround stories.

On the international side, we registered the High Yield Bond, China Select, Asean Frontiers and Emerging Market Corporate funds. This year, we are going to register and promote the Europe Fund and Frontier Market Fund. Frontier markets - like Myanmar, Mongolia and many African and Middle East countries - are not big enough to be called emerging. We have a Latin America Fund, but it may not be robust this year. Mexico may be fine, but the largest component of the continent is Brazil.

How do you view the latest worries about currency crises developing in emerging markets like Argentina? Do you think the Korean market is safe from the impact?

The stock market is in a kind of transition. Last year was an unusual market, with developed markets like the United States, Europe and Japan doing pretty well - the U.S. was up 30 percent - versus emerging markets that went down an average of 7 percent. The two segments showed a decoupling from each other.

We now believe we’ll have synchronized growth around the world. The United States is leading the recovery and Europe is also doing well. Japan is also resetting itself. So in this kind of synchronized growth environment, many emerging market countries, especially in Northeast Asia, should own a very good position.

Therefore, we think some emerging economies like Argentina, Brazil, Turkey, Indonesia and Thailand have become too overstretched. But Korea is not one of those emerging markets and is financially very strong.

The Korean market is already categorized as an advanced market by the FTSE Financial Times index. I think MSCI is considering putting Korea into the developed market category. Given the fact that Korea is a large component of the global market, the market is very liquid and it is quite open to domestic as well as international investors, all these factors should classify Korea into the advanced market category soon.

I think in this kind of crisis situation, everything goes down, and some bad performers go down even more, and better ones start to show positive performances. So even with the Argentine shock, the Korean market did pretty well.

How do foreign investors see the Korean stock market?

Last year, they took a view that globally synchronized growth would benefit markets like Korea, Japan and Taiwan. They had a lot of foreign net purchases last year. However, domestic investors did not follow them. I think foreigners still think there is more upside in the Korean market. It’s the Korean domestic investors who are calling it “unloved.”

Foreign investors put a lot of money in the second half of last year into the market. Many Korean companies in the manufacturing sector, contrary to the late 1980s when they had a lot of borrowing and debt, are swinging up and down.

Now, even though earnings are not so high, they are safer than before. There is risk everywhere. Investing nothing is also risky. 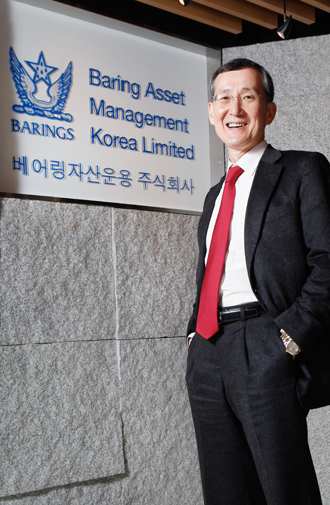