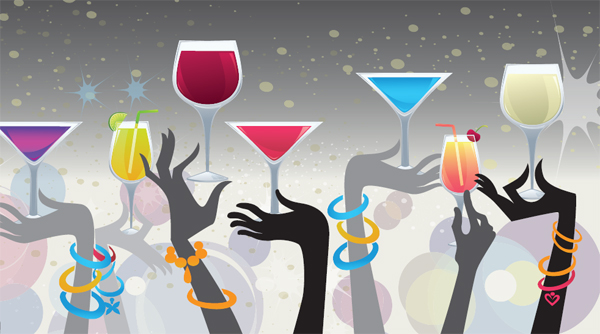 On a recent Friday, Jeon Hyung-woo, a 33-year-old office worker, visited The Bungalow behind the Hamilton Hotel in Itaewon to dispel the stress and fatigue built up during a long work week.

Sitting at the bar, he ordered his new favorite drink, a Remy Soda.

“I order this to refresh myself,” said Jeon. “Sometimes I make the drink at home since all I need to do is mix Remy Martin cognac with club soda.”

In recent years, cognac and whiskey companies have been promoting cocktails made with their products to boost sagging sales.

According to the industry, Korean consumers who were devoted fans for so many years of strong, high-end liquors such as cognac and whiskey have been shrinking.

The biggest reasons are a lackluster economy and a change in drinking culture.

Heavy boozing isn’t as popular as it once was.

Korea remains one of the heaviest-drinking countries in the world. Earlier this month, digital news outlet Quartz, citing Euromonitor studies, reported that Korea ranks at the top of 44 countries when it comes to heavy drinking. It said Koreans drink 13.7 shots of alcohol per week on average. 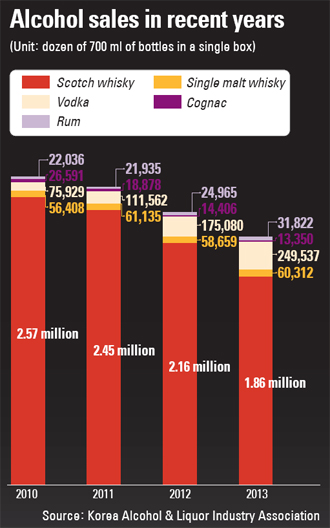 Russia came in second with 6.3 shots per week.

When you drink more than the Russians, the cognac and whiskey makers have got to love you.

Soju remains the staple alcohol in the country, and beer and wine still sell much more than whiskey or vodka.

But sales of cognac and whiskey have been falling in Korea in recent years. In 2010, 2.7 million boxes of a dozen 700-milliliter bottles of whiskey were sold. Last year, sales dropped to 1.9 million boxes.

Cognac sales have been spiraling too. During the same period, sales of boxes of cognac sank from 27,000 to 13,000.

However, sales of rum and vodka, primary components of cocktails, have gone up, reflecting rising demand not only among young women, but also men.

Whiskey and cognac companies hope to ride that growing demand to make up for the decline in boilermakers and shooters, especially targeting young consumers.

The single malt whiskey maker The Macallan has introduced the Mon Sherry cocktail targeted at consumers in their 20s and 30s.

“Single malt drinks have a strong taste and flavor and they are more expensive than vodka or rum, which makes them difficult to be used as the primary ingredient for a cocktail,” said Kim Tae-ho, an official from Edrington Korea, a distributor of scotch whisky made by Edrington Group.

“We’re offering free cocktails [made with Macallan whiskey] at several clubs so consumers in their 20s can enjoy the unique oak flavor of Macallan without paying a cent,” the official said.

Ballantine’s is also trying to attract younger consumers by offering a cocktail that includes hazelnut and chocolate, while Chivas Regal is promoting a cocktail mixed with orange and cherry. Remy Martin is trying to change its image as a drink for heavy boozers through its Remy Soda, which consists of 30 milliliters of cognac and 90 milliliters of soda water.

Korean companies are not missing out on the action as Mackiss, which had sold only soju, introduced a drink called Mackiss last March, a barley-based liquor only used in cocktails.

In just nine months, the company says it sold more than 600,000 bottles.

“We noticed the cocktail market has been growing rapidly and we began to develop our business in it in early 2012,” said Kim Gyu-shik, head of the distribution operation at Mackiss.

The company recently released a follow-up: Mackiss made of sesame leaf, or kkaenip.

The competitive advantage of Mackiss is that it has a much lower price compared to whisky.

“[Mackiss] costs less than 10,000 won ($9.40) and it can be used in creating a wide variety of cocktails by mixing with other drinks such as Coca-Cola, cider or orange juice,” said 24-year-old college student Choi Seong-woo.

Because he’s a frugal student, he says, he often buys Mackiss at a nearby convenience store to make cocktails at his place.

Some alcohol brands are trying to change their designs or appeal to young consumers in other ways.

Diageo Korea introduced a J&B tattoo special edition, with a redesigned bottle with a design that resembles a tattoo. The six colors on the tattoo - pink, green, blue, orange, yellow and purple - light up under a UV light.