Officials work to clean up oil spill off Busan port

Officials work to clean up oil spill off Busan port 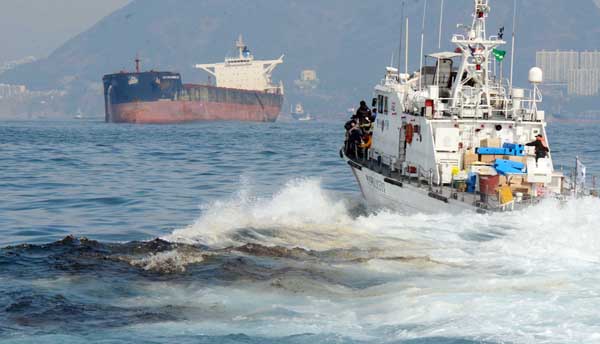 A slick of leaked oil, spurred by a collision between a freighter and an oil tanker on Saturday, engulfs the waters off Busan yesterday. [NEWSIS]

A freighter leaked about 1,987 barrels of oil into the sea off Busan after it collided with an oil tanker Saturday, Coast Guard officials said yesterday.

The accident caused a 20 centimeter (7.9 inch) by 30 centimeter hole to form in the Liberian-registered cargo ship, which was carrying 1,400 kiloliters, or 8,805 barrels, of oil near South Korea’s largest port.

The scope of the spill is larger than that of the leak that occurred in the waters off Yeosu, South Jeolla, earlier this month.

Marine officials said they had discovered a band of oil that spread as far as 4.5 kilometers away, but noted that it would not have any damaging effects on nearby fish farms 6 kilometers away from the affected site.

The type of oil leaked has fueled concerns because Bunker C Fuel Oil, known to be less volatile, is more difficult to clean up.

The Coast Guard attributed the collision to tumultuous weather conditions at the time.

“When the oil tanker transferred oil to the freighter, there were heavy waves and swells,” said Bae Jin-hwan, head of the Busan Coast Guard.

“Inclement weather conditions caused the two vessels to collide with each other.”

But despite authorities’ assurances, the series of consecutive oil spills recently has triggered doubts over the lack of guidelines regulating the activities of heavy watercraft.

Coast Guard personnel and government officials worked to contain the slick of oil throughout the weekend, deploying approximately 74 response vessels.

Oil-containment booms were used to surround the spill, while responders used oil fences to contain the further spread of the oil in the water, the Coast Guard said.

A pollution response team, formed in the wake of the spill, remained on scene to verify the cleanup’s completion, the Ministry of Oceans and Fisheries said.

The authorities said it would take about three more days to clean up the affected area.

They added that they would carry out necessary measures as soon as possible.

“We are cooperating with private companies to try our best to control the leak,” Bae said in regard to the cleanup efforts.