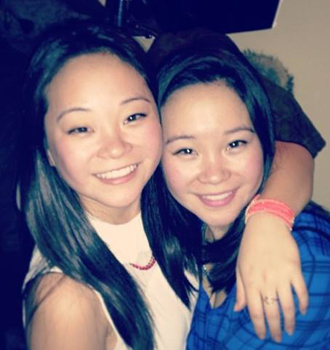 Identical twin sisters Anais Bordier, left, and Samantha Futerman, who were born in Korea and adopted abroad by different families in different countries, finally met each other after 26 years apart. [JoongAng Ilbo]

LONDON - For 25 years, identical twins Samantha Futerman and Anais Bordier lived separate lives, growing up in different countries and speaking different languages. Only by chance did the two 26-year-old sisters find out about the existence of the other, connecting through social media.

Their first encounter was in February 2013, when Bordier sent a message via Facebook to Futerman. Bordier, who at the time was enrolled in a fashion course at Central Saint Martins College of Arts and Design in London, had been told on a few occasions that she resembled Futerman, an American actress who is perhaps best known for her appearance in the film “Memoirs of a Geisha.”

“One day, I received a message from a woman living in London,” Futerman said in a television interview. “I was really surprised to see her profile because she looked just like me.”

The two suspected they could be twins after they began to correspond more and more. Both were born on Nov. 19, 1987, in Busan, where they were also both given up for adoption three months later.

“The birth record [Samantha] sent me didn’t state that she was a twin, but everything started to come together when I looked at her photos from when she was little,” Bordier said. “It felt like I was having a heart attack, but it was also the happiest moment - a new world was opening.”

They were even more astonished when they shared stories through video chat. Other than their physical similarities, they were also huge fans of J.K. Rowling’s Harry Potter series and had much of the same habits and routines.

Futerman and Bordier finally met for the first time in May 2013, about three months after they first contacted each other.

“I felt like I was paralyzed because it was like I was standing in front of myself,” Bordier said, describing the moment when Futerman came in to meet her. “We just kept looking at each other.”

The twins’ adopted parents were just as surprised.

“You look just the same!” Bordier’s mother exclaimed when she first met Futerman. And Bordier’s father just burst into tears.

And in true twin style, the two even played a bit of a prank when they first met Futerman’s parents, with Bordier switching places with Futerman, and Futerman coming in later.

Her mother and father were shocked at their likeness, and wondered aloud if they could truly be sisters.

DNA tests conducted this month confirmed that the two were, in fact, identical twins, according to British media, and perhaps validated what Bordier and Futerman had instinctively felt all along.

“I did feel like I missed something [when I was a child], and I even had an imaginary friend,” Bordier acknowledged in an interview. “I needed that comfort, I guess.”

So far, the sisters have met up in London, California and their native homeland, Korea. They’re currently working toward funding a documentary film that tells their story.