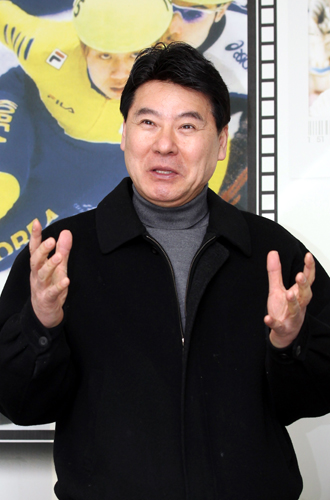 When Ahn Hyun-soo, now Viktor Ahn of Russia, crossed the finish line first and won the men’s 1,000 meters short track speed skating race at the Olympics on Saturday, the cameras honed in on two members of the audience who were crying: Woo Na-ri, the 28-year-old skater’s fiancee, and Ahn Ki-won, his father.

But later in the day, when the senior Ahn met the Ilgan Sports, an affiliate of the Korea JoongAng Daily, he wasn’t in tears anymore.

“It was even happier than when my son won three gold medals in Turin in 2006,” he said. “All the memories that my son and my family have had over the past eight years just popped into my head.”

But after taking a deep breath, Ahn started to reveal some of his son’s most controversial experiences, unleashing his fury on the Korea Skating Union and the people he feels are responsible for Hyun-soo being forced to change his nationality.

The person Ahn singled out for criticism was the vice chairman of the Korea Skating Union, Jeon Myung-gyu.

Ahn said that Jeon was his son’s professor at Korea National Sports University. But, soon after Viktor refused to follow his directions, the professor ruined his son’s life, he said.

Jeon was the national short track team coach from 1998-2002 and has been the vice chairman of the union since 2009. He was “the person who disrupted Hyun-soo skating in Korea,” said Ahn. “Jeon had a plan for my son’s career, but soon after my son refused to follow that plan, he started hurting everything my son did.

In 2007, Jeon told Hyun-soo to go to graduate school, but Hyun-soo chose to join the skating team sponsored by Seongnam city government instead.

“At the time, Jeon visited me and told me that he could end my son’s career if he joined the team,” Ahn said. “After he became the vice chairman of the union in 2009, he established rules that created a hostile environment specifically against my son.

“Even before the Seongnam city government team was dismantled, Hyun-soo and I planned to leave Korea,” Ahn continued. “Russia, Canada and the United States were all options. It all happened because of Jeon.”

Ahn said Jeon abused his authority. “In Russia, they provided an environment where talented players could focus on their careers. The skating union seriously needs to be reformed if the country doesn’t want to lose any more talented athletes.”

The Korea Skating Union has said it will hold off until after the Olympics before responding to all of the allegations made toward it and its members.