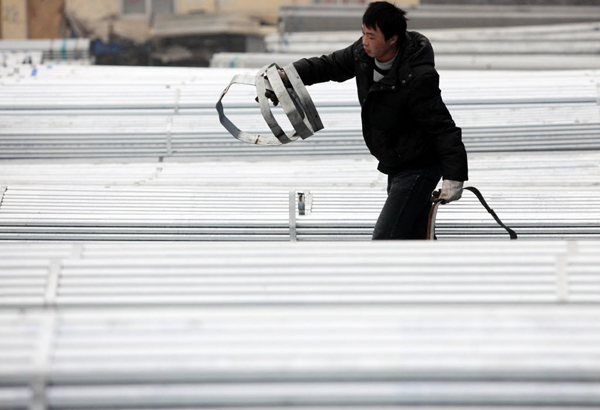 A worker walks through stacks of steel pipes as he holds steel belts at a storage yard in Shanghai, China, earlier this month. [BLOOMBERG]

The big debate about how fast China’s economy will grow this year can find some answers in the real world, where signs suggest the growth giant is slowly but surely losing its fizz.

From falling power consumption to record-low steel prices, a clutch of indicators show sluggish investment and domestic demand are weighing on China’s $9.4 trillion economy, a worrying sign for some economists who are cutting their GDP forecasts for 2014 - which is unusual so early in the year.

Rising interest rates and restrictions that stop wasteful spending by Chinese governments have depressed investment to at least a decade low, making it perhaps the single biggest drag on the world’s No. 2 economy.

The implication is big, especially since investment accounted for over half of China’s 7.7 percent economic growth last year.

Experts believe growth may sag in coming months toward 7 percent, a rate bound to disconcert investors and even some policy makers in Beijing who are worried that the economy is braking too hard.

“It will be a few more months before we hit the bottom,” said Frederic Neumann, an HSBC economist in Hong Kong. “It may take more aggressive measures from the government to turn things around.”

Financial markets long accustomed to China’s stellar, double-digit growth rates of the past are predictably skittish, a factor that contributed to the emerging markets sell-off this year.

A confusing run of official Chinese data has made it more difficult to gauge whether Beijing’s plan to gear the economy more toward consumption and services is working. The unpredictability has left forecasts for growth this year ranging from 7 percent to above 8 percent.

Four separate surveys on the country’s manufacturing and services sectors in recent weeks showed growth slid to multi-month or multi-year lows in January, as companies fought falling overseas and local demand. Yet official data this week showed Chinese exporters had a surprisingly good month in January as sales jumped 10 percent, and import growth leaped to a six-month high.

Bank lending figures for January also were strong, despite a credit clampdown by the central bank.

Analysts say the conflicting signals are exaggerated by data distortions during the weeklong Lunar New Year holiday, when businesses close.

Only in April, when the government publishes the data for March, will investors know what is really happening.

Yet in the real economy, the signs are pointing downward.

Take electricity consumption, for example. It was famously touted by Premier Li Keqiang in 2007 as a good measure of China’s economic pulse, compared to “man-made” gross domestic product data often massaged by officials trying to prove themselves.

Power consumption in the first 20 days of January rose a mere 2 percent from a year ago, according to China’s economic planner, the National Development and Reform Commission. Jia Fusheng, a commission official who disclosed the figure, conceded that the rate is “certainly quite low”, but suggested the Lunar New Year holiday and a relatively warm winter may have been the cause.

The State Grid Corporation of China, which sells electricity to 85 percent of China’s population, is not so sanguine. It expects business to slow this year as a wobbly economy and growing environmental awareness temper demand. Electricity consumption should rise between 6.5 percent and 7 percent this year, State Grid said on its website in January, down from last year’s 7.5 percent increase.

“It’s a good indicator of activity in the manufacturing industry,” said Haibin Zhu, a JPMorgan economist. “On the ground, the sentiment that we got by talking to factories was not upbeat in January.”

Even those skeptical that power consumption paints the true economic picture find other reasons to be cautious.

Prices for cement, steel and iron ore - the main materials for constructing buildings and railways - are falling, partly because demand is dropping on slower state investment. Just last week, steel prices slumped to a record low and iron ore prices drooped to a seven-month low.

Suspended construction work during the winter and fierce competition among steel mills that have sparked brutal price wars have dented prices. But so has weaker final demand.

Analysts think much of the drop in demand is the result of provincial and local governments - having chalked up at least $3 trillion in debt - meeting stricter orders from Beijing to cut graft and frivolous investment.

Shrinking budgets have even affected New Year revelry. Retail sales over the holiday rose at their slowest rate in five years at 13 percent as officials scrapped lavish celebrations. Prices of sea cucumber, a delicacy that can cost several thousand yuan, are at their lowest in four years, said Dong Tao, an economist at Credit Suisse.

The growing signs of weakness have convinced analysts such as Tao from Credit Suisse to shave his first-quarter GDP prediction to 7.3 percent, which would be the slowest pace since the global financial crisis, from 7.7 percent on an annual basis. The economy grew 7.7 percent in the fourth quarter. But to Mark Williams at Capital Economics in London, more signs of slack is good news, not bad.

An orderly slowdown where wasteful spending is reduced and growth is sliding toward 7 percent is just what China needs as part of reforms to lift consumption at the expense of investment.

“It’s a healthy correction and should be welcomed,” said Williams.