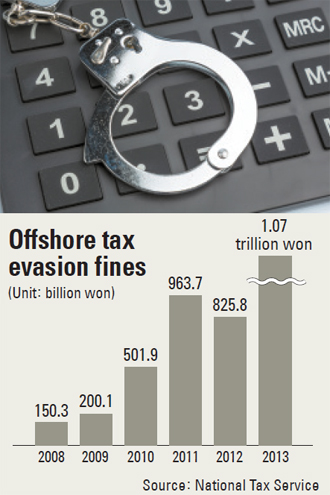 The Park Geun-hye administration’s vigorous clamp down on offshore tax evasion appears to have paid off, with fines collected for offshore tax dodging exceeding 1 trillion won ($942.7 million) for the first time in 2013, according to the National Tax Service. That’s an increase of 30.6 percent from the 825.8 billion won collected in 2012.

The money collected for offshore tax evasion penalties is particularly significant when compared to the 501.9 billion won collected in 2010, which is now double that figure.

“Since we started to fully investigate tax evasion in 2009, the fines collected have reached beyond 1 trillion won for the first time,” a tax agent official said. “Our focused effort on preventing offshore tax evasion is evident in our performance.”

Fines were handed down in 211 cases in 2013, an increase from 202 in the previous year. The investigation also showed that ghost companies were frequently used as fronts in tax havens as part of tax evasion schemes.

The tax office has cited growing international cooperation, as well as better methods of tracking down dodgers and sharing data with related agencies, as reasons for the significant improvement in its investigations.

The National Tax Service started tightening its investigation against offshore tax evasion in 2009. However, its investigation only went into full swing last year after President Park began her term, promising to crack down on illegal business activities, including tax dodging, as part of her campaign for economic democratization.

The tax office was handed new authority last year after government regulations allowed them to tap into financial companies’ transaction records and individuals’ accounts, which were once only accessible to the Financial Services Commission and the Financial Supervisory Service.

The investigation this year is also expected to expand, as the tax agency has once again increased compensation for those who report any suspicious financial transactions or activities. The reward for reporting tax evasion in 2013 was raised from 100 million won to 1 billion won. This year, the payment rose to 2 billion won.

The tax agency said it has secured 400 gigabytes worth of information on paper companies in tax havens since June through a joint investigation with authorities in the United Kingdom, the United States and Australia.

So far in 2014, the tax agency said it has investigated 61 cases for offshore tax evasion and handed down a total of 135.1 billion won in fines.