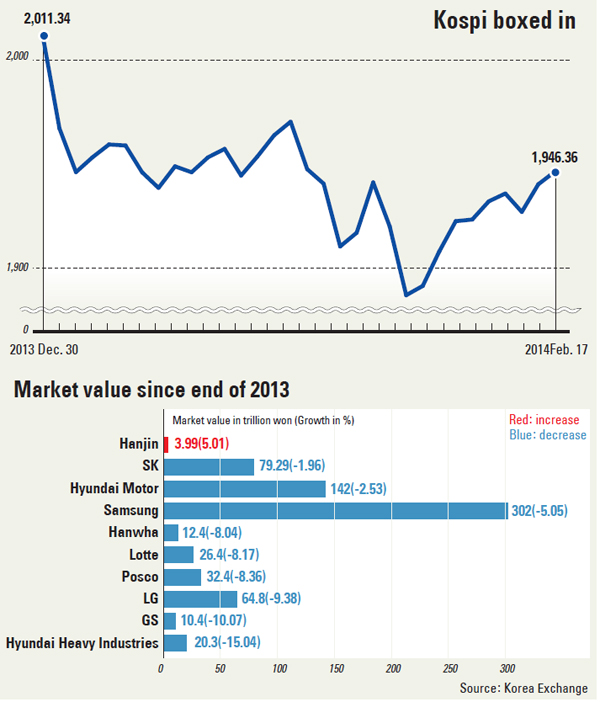 The recent torpid stock market has finally affected the biggest companies on the Seoul main bourse, with combined market capitalization of the top 10 conglomerates shrinking 5 percent since Dec. 30.

So far this year, Hyundai Heavy Industries, the nation’s top shipbuilder, saw the sharpest fall as its market capitalization fell more than 15 percent to 20.3 trillion won.

The only conglomerate among the top 10 that saw its market value increase was Hanjin, which grew 5 percent to nearly 4 trillion won.

At the beginning of the year, there was growing optimism that the stock market would thrive given that uncertainties involving the U.S. Federal Reserve’s tapering of its stimulus had finally been clarified.

Some brokerages projected the benchmark Kospi would easily surpass 2,100 in the first month alone and expand to the 2,500 level by the year’s end.

However, the Kospi so far has shown no signs that would indicate a bullish rally is in the foreseeable future.

The biggest factors boxing in the Kospi were jitters stemming from emerging markets and disappointing economic indicators from China and the United States released at the end of last month.

There are signs the situation is calming, with financial scares from Argentina, Turkey, Indonesia and other emerging markets easing since last week. There is even a growing consensus that the impact of these markets on the Korean stock market will be limited.

Although the Bank of Korea left its benchmark interest rate at 2.5 percent for the ninth consecutive month, the central bank governor suggested that emerging market uncertainties will be resolved soon.

With such renewed optimism, the market yesterday showed some improvement, but still failed to reach 1,950.

“This week we expect the market to make a mild recovery on the back of easing uncertainties in the global financial market,” said Ma Ju-ok, an economist at Kiwoom Securities.

Ma, however, noted that even so, the expansion will be limited as the market currently lacks a significant factor that would further push up indexes.

“It will be difficult for the Kospi to move beyond 1,900 and 2,100 before [Korean] companies earnings show a significant improvement,” Ma said.

The economist said the key factor will be foreign investment.

Foreigners bought loads of shares in the second half of last year, but started to sell their holdings when the U.S. Fed started to reduce its bond-buying program.

Foreigners held 418 trillion won worth of shares in December, which was 35.3 percent of Korean stocks by market value. That figure has dropped to 399.6 trillion won, or 34.9 percent.