Chum Churum about to get softer

Chum Churum about to get softer 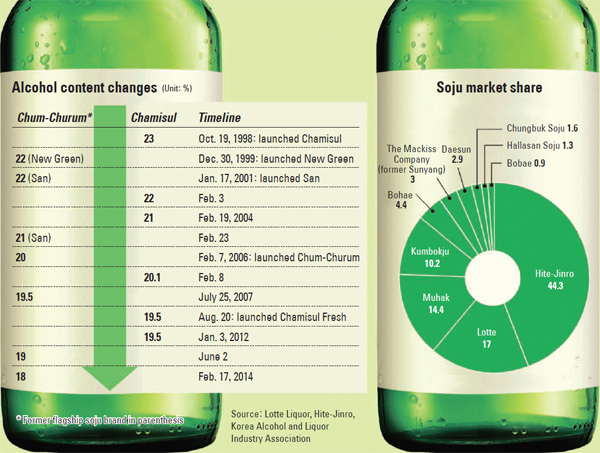 The nation’s favorite soju is getting softer again.

Lotte Liquor yesterday began distributing its flagship soju Chum-churum (Korean for “like the first time”) with its alcohol content lowered from 19 percent to 18 percent.

In response, Hite-Jinro, the nation’s largest soju maker, announced on Sunday that it will lower the alcohol content of its flagship Chamisul from 19 percent to 18 percent.

However, it is first time in more than six years that Lotte has lowered the alcohol content of its flagship brand.

Launched in 2006, Chum-churum was the first soju to break the 20 percent mark, pushing alcohol content down to 19.5 percent in July 2007.

“In a wide-ranging survey of regular consumers, restaurant owners and our sales employees, Korean people turned out to prefer the soft taste of low-alcohol drinks,” said Baek Seung-sun, head marketing manager at Lotte Liquor. “This time, we lowered alcohol content another percentage point to assert our brand image as a leading liquor maker pursuing the soft-taste soju trend.”

“We can save production costs in raw materials like ethanol by lowering alcohol content. But it is only less than 1 percent,” another Lotte employee said.

“As people nowadays show a healthy consumption trend in food and beverages, both younger generations and older consumers now prefer softer soju,” said Mickey Lee, the communications director at the company. “At the same time, we will keep producing Chamisul Classic, which contains 20.1 percent alcohol, in a bid to satisfy the demand of consumers who prefer a strong taste.”

Recently, however, the declines have been more frequent. After a 25 percent soju was launched in the 1970s, there was not much of a change for 20 years.

Hite-Jinro first released its 23 percent Chamisul in 1998, and the 20 percent mark was broken by Chum-churum in 2007.

Industry insiders predict that the soft competition between the two brands will not go any lower than 18 percent.

In 2010, Hite-Jinro rolled out the nation’s softest soju - Favorite - with 15.5 percent, but it failed to catch on and is no longer produced.

But it may be too late for the liquor giant to break into the soft soju market already dominated by Lotte Liquor’s Chum-churum Cool (16.8 percent) and Muhak’s Good Day (16.9 percent).