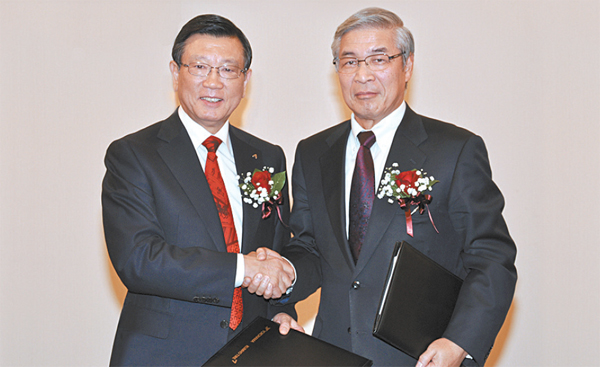 Kumho Tire, the nation’s second-largest tire manufacturer, is looking to boost its competitiveness in technology after sealing a partnership deal with Japan’s Yokohama Rubber.

The affiliate of Kumho Asiana Group said that Park Sam-koo, its chairman, and Tadanobu Nagumo, Yokohama Rubber Group’s chairman, signed the agreement on Saturday in Tokyo.

The deal was the culmination of a memorandum of understanding announced in December. Yokohama, founded in 1917, is the world’s eighth-largest tire manufacturer with 12 plants in seven countries.

Kumho and Yokohama said they will cooperate in R&D and share future technologies in a bid to improve their positions in the rapidly increasing market for high performance and environmentally friendly products. They believe that, in the long term, the alliance will boost their competitiveness against Bridgestone, Michelin and Goodyear.

Kumho, the world’s 12th-largest tire maker, said the deal is the equivalent of increasing its investment in R&D to 5 percent of sales from the current 2 percent. It expects to learn better manufacturing technologies and quality management from Yokohama.

The Japanese tire manufacturer expects to benefit from Kumho’s network in China.

“With the construction of a central R&D center in Yongin, Gyeonggi, the strategic technology alliance with Yokohama will boost our reputation as a technology master company,” said Kumho Tire President Kim Chang-kyu. Meanwhile, the deal on Saturday didn’t include a capital alliance with the two companies owning each other’s shares that was planned in the MOU. Kumho said negotiations are ongoing.

Industry observers said that Kumho will likely end a debt-workout program it has been under since 2010 this year.

“The alliance with Yokohama will speed up the recovery of its earnings in terms of R&D and utilizing facilities.”