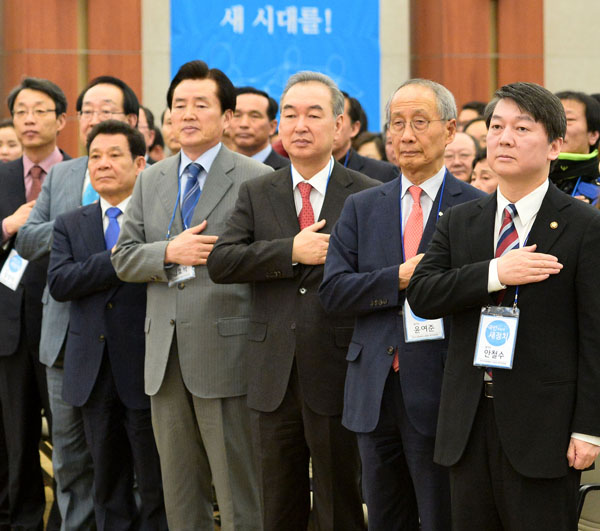 Independent lawmaker Ahn Cheol-soo yesterday unveiled a list of 347 people who will join his new political party, which is set to be established next month. The list did not include formidable political heavyweights, though the former presidential candidate explained that it reflects the party’s aim to substantiate “real-life politics.”

Representative Ahn and his supporters gathered at a launching ceremony yesterday in the Kim Koo Museum & Library convention hall, central Seoul, to officially embrace his new party’s name, the New Political Vision Party, where they unanimously elected Ahn as the chairman of the central management committee, the top decision-making body of the party’s preparatory committee.

The appointment means he will assume legal responsibilities for the new party. The meeting comes three months after the independent lawmaker proclaimed he would establish his own political party, opening the possibility for yet again running for the presidency in the next election.

“Our citizens have been very sincerely leading their lives,” Representative Ahn said in the presence of about 1,000 attendees at the convention hall. “What is the new politics that you want? It is an order to do what politics is supposed to do, and to recover the public nature of politics. It is also a strong desire to make citizens the owners of politics, not politicians.”

He noted that politics should establish a systematic framework for a fair society without privilege and foul, and that Korea should move toward a “democratic market economy.”

“The government and individual enterprises should be able to closely talk about providing creative jobs for youths, as well as sustainable jobs to those in need of work.”

Notable figures include Jang Ha-sung, a professor of management at Korea University and the head of Policy Network Tomorrow, a private think tank set up by Ahn; and Kang Bong-kyun, a former finance minister who the party is known to be considering as a candidate for the North Jeolla governor post in the upcoming elections.

Jang, a long-time economic adviser to Ahn, is best known for his support of corporate reforms and shareholder rights.

When questioned by reporters about the predictable representatives among the party’s initial members, Keum Tae-sup, the preparatory committee’s spokesman, said the focus was on variety.

“Some seem to have anticipated eye-popping figures, but the party-building process is different than nominating candidates to run in the local elections,” he said, adding that the discussion on potential candidates just started yesterday.