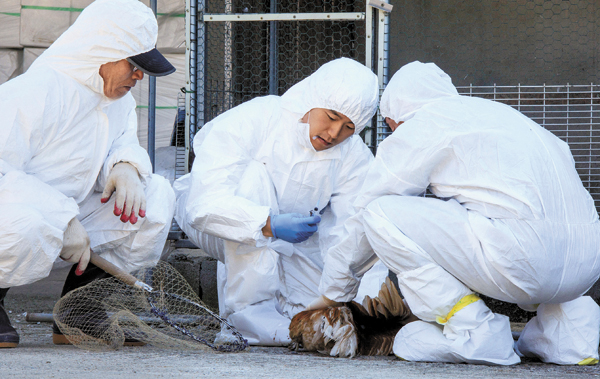 Lee Jae-uk, middle, a veterinarian with the Jeollabukdo Institute of Livestock and Veterinary Research, collects samples from chickens last Friday to check for avian influenza infection. He has been dispatched a dozen times for culling operations and has buried hundreds of thousands of ducks and chickens over the last month. “Though I have to do this as a government employee, it breaks my heart to conduct the culls,” Lee said. By Oh Jong-chan

Avian influenza continues to spread despite efforts to control it, including the culling of more than four million ducks and chickens.

Bird flu now threatens the Seoul metropolitan area, with another confirmation of the H5N8 strain at a duck farm in Anseong, Gyeonggi, yesterday, the third outbreak in the province.

Some 7,000 ducks at the farm and more than 100,000 chickens and ducks at six other farms within a three-kilometer (1.8-mile) radius were culled yesterday to prevent the spread of the disease.

Owners of poultry farms that have not been contaminated have been told to stay alert of the spread of the disease and take preventive measures. 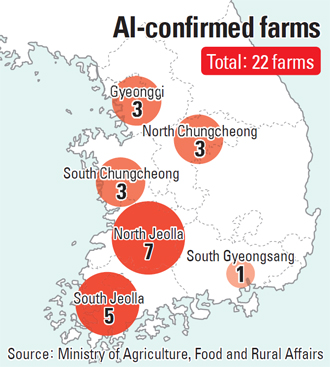 The most nerve-racking moment for Kim Gwang-seok, 66, a chicken farmer in Hwaseong, Gyeonggi, is when he opens the doors of his farm at 5 a.m. every day. He worries that hundreds of his chickens may have died overnight.

Kim’s anxiety grew as the AI began to spread from its first outbreak in Gochang, North Jeolla.

He had to give up celebrating the Lunar New Year in order to steralize his farm when a farm 12 kilometers away was confirmed to be contaminated with highly pathogenic AI.

“My relatives live only a few kilometers away, and I visit them every year on Lunar New Year,” said Kim. “But I didn’t go this year because I didn’t want to let my chickens die.”

Kim puts every effort into sterilization and checking his chickens, for which he stays in the farm from 5 a.m. until midnight.

His plan is to raise the chickens until early March so that he can sell them. But if his farm is infected, the birds will have to be killed.

“I’m just doing my job and praying everything is going to be all right,” Kim said.

Kim Hyeon-geun, a 54-year-old poultry farmer who runs two duck farms in Gochang and Buan counties, North Jeolla, has been spending his days drinking at a small local diner after he had his 20,000 ducks culled on Jan. 22.

“What else can I do after I lost money and have nothing to do?” says Kim. “I can’t live without drinking for now.”

He found bird flu symptoms among his ducks on Jan. 21, a day before he planned on selling them. Gochang County immediately dispatched a team for culling after his report, and he cannot buy new ducks because of preventive measures.

“First I regretted reporting it because I would have sold them on the next day,” said Kim. “But I followed my conscience, reminding myself that my children might eat it.”

Kim will be compensated a maximum of 80 percent of the value of his ducks by the government. Nevertheless, he has 200 million won ($188,600) in debt that he owes relatives. He managed to keep his farm clean during an outbreak of AI four years ago, but he couldn’t manage it this time.

The virus is causing headaches for both farm owners and government servants trying to keep the virus from spreading. Lee Jae-uk, a veterinarian working at the Jeollabukdo (North Jeolla) Institute of Livestock and Veterinary Research, has been sent out a dozen times during the current AI outbreak to cull ducks and chickens.

In the early stages of the outbreak, his job was to fumigate and take samples. He began to take part in the culling due to manpower shortages.

The work has kept Lee so busy that he only returns home twice a week and sleeps in his office on other nights. He was worried when his 2-month-old son caught a cold, and feared bird flu infection. Fortunately, the baby only had a common cold.

“As a vet who saves animals, it is very tormenting to cull livestock,” says Lee.

The H5N8 strain is not known to be able to infect humans.