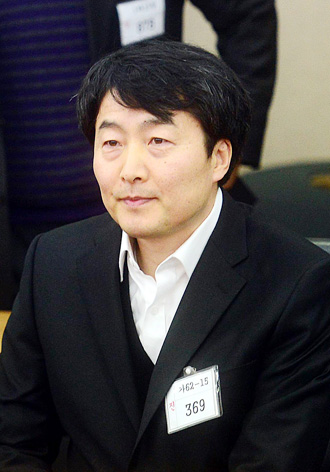 SUWON - Representative Lee Seok-ki of the Unified Progressive Party was convicted of conspiring to overthrow the government in the event of a war with North Korea, sentenced to 12 years in prison and stripped of the right to vote or run for office for 10 years following his release from jail.

It was the first rebellion conviction in Korea in 34 years.

In a case that was closely watched by the public, Kim Jung-won, Suwon District Court’s presiding judge, ruled that Lee was a key member of the UPP’s underground Revolutionary Organization. He accepted the prosecutors’ claim that the group plotted an armed rebellion against the Seoul government in the case of war breaking out with North Korea, as they believed it would in 2013.

“The defendants formed an underground group, the RO, in defiance of the Republic of Korea’s Constitution and waited for the right moment to subvert the state while working in various sectors of society, such as the National Assembly, political parties and civic groups,” said the court.

“The court accepts that the RO was the main actor behind the rebellion scheme and Lee was the man in charge of running it.”

“Representative Lee posed a serious threat to the principles of national democracy and order through conspiring in a rebellion. The nature of his crime is grave.”

Six other defendants indicted on similar charges, including violation of the National Security Law, received sentences of four to seven years in prison.

The court handed down seven-year prison terms for four of the defendants: Lee Sang-ho, an adviser to the Gyeonggi Progressive Alliance; Cho yang-won, head of the Social Trend Research Institute; Kim Hong-yeol, director of the UPP’s Gyeonggi chapter; and Kim Keun-rae, co-deputy head of the UPP’s Gyeonggi chapter. The prosecutors sought 15-year prison terms for the four.

Hong Soon-seok, deputy head of the UPP’s Gyeonggi chapter, was sentenced to six years in prison while Han Dong-geun, former director of the UPP’s Suwon chapter, received a four-year term.

The prosecution requested a 15-year term for Hong and 10 years for Han at the last hearing on Feb. 3.

The judge also noted that testimony given at the trial by an undercover informant, identified only by the surname Lee, who reported the rebellion plot to the National Intelligence Service, “bore credibility.” Lee testified that members of the RO secretly plotted to destroy key national infrastructure such as oil storage utilities and telecommunications facilities after conflict broke out between South and North Korea.

The plotting was done at a time of tension between South and North Korea and days after Pyongyang announced it was unilaterally scrapping the armistice with the South that ended the 1950-53 Korean War.

“Lee [who first reported to the NIS about the RO in 2004] gave detailed accounts of activities of RO members in a very consistent way, drawn from his 10-year experience as an undercover informant inside the group.”

The court also said during an RO meeting on May 12 that the defendants “dared to plot an armed rebellion with 130 members at the heart of the country’s capital,” which the court called “a grave crime.”

The court also ruled that Lee and six other defendants violated National Security Law by possessing “anti-state material” and by praising the Kim Jong-un regime in Pyongyang.

“The defendants sang songs that praised the North, such as ‘Revolutionary Comrade,’ and owned materials that are enemy-friendly,” said the court, which ordered the confiscation of all anti-state material from Representative Lee, Lee Sang-ho and Kim Keun-rae.

Enacted in 1948, the National Security Law prohibits an individual from supporting or praising the Communist North. Visiting the North without government approval is also punishable under the law.

Having material such as books or documents that are deemed to praise North Korea is also illegal under the 67-year-old law.

The seven defendants’ defense team said it will appeal the ruling. 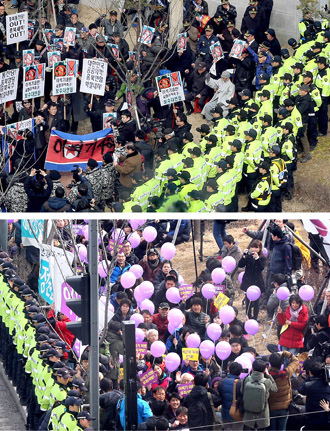 The court’s conviction was the first for rebellion in 34 years. In 1980, Kim Dae-jung was prosecuted on charges of treason and instigating an uprising in Gwangju in 1980 in violation of National Security Law by the Chun Doo Hwan military government. Kim was sentenced to death in a military trial but was released from prison in December 1982 and went on to be elected president in 1997.

Reflecting the attention paid to the case, crowds in favor of and against the defendants rallied outside the Suwon District Court.

Nearly 500 hundred members of conservative civic groups held a rally hours before the ruling. Veterans wearing military uniforms held placards bearing the image of Lee Seok-ki with an X scored through it. They chanted “Death to Lee Seok-ki” before, during and after the sentencing hearing.

“He deserves a death sentence, not a prison term for his crimes against the state,” said Choi Kyu-cheol, a 55-year-old member of the Special Forces Veteran Association. “My son is now in the Army serving the country on this cold winter day. How could Lee have done such a treasonous act as a lawmaker?”

Across the street, about 300 supporters of the UPP held purple balloons and chanted “Lee Seok-ki is not guilty.” To prevent clashes between the two groups, the police dispatched 1,200 policemen.

The court held 45 hearings over a three-month period prior to the sentencing yesterday.

Over the course of the trial, the prosecutors sought to convince judges that Lee and the six other defendants plotted rebellion during the RO meetings last Spring, when inter-Korean tensions reached a high with Pyongyang warning foreigners to leave the South to avoid an imminent war.

The defense team claimed the defendants never planned to wage a revolt against the state. It said the RO was merely a private group of UPP supporters.

The charges against Lee and other UPP members have ignited debates over the issue of pro-North factions in the South, with conservatives claiming they represent a serious threat to the South’s democracy.

UPP supporters, on the other hand, have argued that the Park government is using the idea of pro-North factions as a smoke screen to deflect public attention from the government’s alleged meddling in the 2012 presidential elections.

If anything, the case has illustrated that support for North Korea runs deeper than many realized in South Korean political circles.

Yesterday’s ruling is expected to influence a pending ruling by the Constitutional Court on a request filed by the Park Geun-hye government last year to dissolve the beleaguered UPP. The request by the government was the first of its kind in Korean history.

The Constitutional Court is expected to make a decision on the case before June 4 local elections.