For Kim, one more opportunity to repeat as champ

For Kim, one more opportunity to repeat as champ 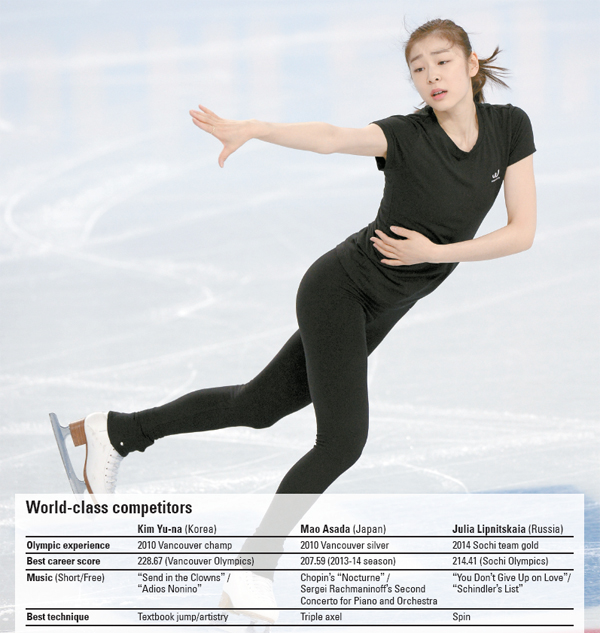 The Sochi Winter Olympics might be the most disappointing international event Korea has had recently. The national team aimed to be in the top 10 in the medal count but hasn’t even come close, and the country has struggled in short track and speed skating events.

After Ahn Hyun-soo, now Viktor Ahn, made a huge Olympic comeback, winning gold and bronze medals in the men’s short track while skating for Russia, Koreans are more downcast than ever. Under such circumstances, the nation is hoping that figure skating star Kim Yu-na will shine during Sochi’s final week.

When her short program begins at 2:24 a.m. tomorrow, Korea time, the 23-year-old will begin to defend her 2010 Vancouver Olympics championship. She will perform fifth in Group 3.

There are five groups, each consisting of six skaters. Among the 30 competitors, the top 12 according to their world ranking were put into Group 4 and Group 5 in advance. Although Kim is the defending Olympic champion, she is ranked No. 29 and is 15th among the competitors. Russian rising star Julia Lipnitskaia will perform first in the last group, and Mao Asada of Japan will perform last. Kim wanted to perform at least second or third in a group because the ice quality is better when the rink is cleaned after each group is finished.

“It wasn’t the best draw for her, but since she is a veteran who has experienced diverse situations in international events, I think she will perform the program without any problems,” said Jung Jae-eun, a spokesman for the Korea Skating Union. “But we do worry about the ice quality of the Iceberg Skating Palace because it is much worse than Vancouver’s.”

On Sunday, Kim had her first training at the venue and said the ice quality was better than what she had heard from the short track speed skaters who had their competitions there. The ice condition was similar to Adler Arena, where she had two training sessions after she arrived at Sochi.

But the Iceberg Skating Palace wasn’t the best venue for other athletes. Yuzuru Hanyu of Japan, who won the gold in the men’s singles, fell twice while landing after a jump in his free program. Patrick Chan of Canada, who was considered the strongest gold medal contender, had to settle for silver because he couldn’t adapt to the rough ice.

Many similar things happened in the short track events. Park Seung-hi, who won the bronze in the women’s 500 meters short track, was leading the race but fell after colliding with Elise Christie of Great Britain, who slipped while making an aggressive turn. After the collision, Park got up quickly and started racing, but her left skate blade got stuck on a small furrow and made her fall again.

“It was my first time ever falling down two times in one race,” Park recalled. “Short track skaters need to race on hard ice that doesn’t have many furrows as we have to make turns a lot in races, but the ice in the venue wasn’t good enough for us. I think that is why so many short track skaters have tripped.”

“I never know until I finish the programs,” Kim said. “But I don’t see any special things to worry about.”

However, Kim will face some world-class skaters for the first time in a year. She hasn’t participated in any of the International Skating Union’s 2012-13 season events. She will compete against Asada, who has been her biggest rival for the last decade, and Lipnitskaia, who is making headlines in her home country.

Local pundits are confident that Kim will dominate on the ice, especially with her exceptional jumps.

With the ladies’ short program set to start at midnight, the atmosphere is getting hot, and the competition in the ladies singles is being framed as Kim versus Lipnitskaia - although there are other solid competitors like Italy’s Carolina Kostner and Ashley Wagner of the United States.

Kim is the current record-holder in the ladies singles, which combines the totals of the free and short programs. While she has been preparing her program as calmly as usual, the 15-year-old Lipnitskaia has been rising quickly. The Russian prodigy became the youngest female figure skater in 78 years to win a gold medal after leading her nation to the inaugural team title.

After her victory, Lipnitskaia has been dubbed by European media as a rival to Kim, who is aiming to become only the third woman to win back-to-back figure skating golds at the Winter Games.

However, local experts said that it will be difficult for Lipnitskaia to challenge Kim, especially when it comes to jumping techniques.

They said that, because of the duration of her spins, Kim has the most dominant technique in terms of the level of difficulty and the accuracy of her triple jumps. Before reaching the highest point of the jump, Kim spins once, then quickly rotates twice. This differs from some other figure skaters who try to start their spins at the beginning of their jumps because they fear they might not be able to complete the triple rotation.

“When male skaters make four rotations, sometimes it looks like they have only spun three. That’s because they have such a high and long distance to jump, the spin looks to be slow,” said Ahn So-young, a director at the Korea Skating Union. “Kim Yu-na’s case is similar and this fact can earn additional points from judges.”

Some experts claim Lipnitskaia, the winner of the European Championships, performs “cheating” jumps, which are those whose rotations begin not in the air, but on the ice. Others say that she half rotates her body when going into the jump and half rotates while landing on the ice.

Unlike Kim, Lipnitskaia also has a wrong-edge problem, especially during her triple lutzes. According to experts, skaters should lift off with the outside edge of one skate when doing lutzes, but sometimes Lipnitskaia’s left ankle leans toward the inside or is vertical with the ice. She received wrong-edge decisions in last month’s European championship and in the Sochi team competition.

But despite these problems, Lipnitskaia has been receiving high scores. She scored 209.72 points in the European championships, then received 214.41 points in the team event in Sochi. Experts also say her performance is improving.

Some critics say the recent “scoring inflation” in ladies figure skating has contributed to the Russian’s high scores. Since Kim received 228.56 points in the Vancouver Games to claim gold, the 200-point level is no longer a huge benchmark.

“Since Yu-na, it feels like points have been inflated overall,” said Bang Sang-ah, a commentator for SBS. “Skaters these days seem to be earning points more easily than the past.”

Kim, however is staying focused on her performance.

“I think if I put forth my best effort, there is going to be no regret. Fans and media love to make a comparison between athletes, but such a thing isn’t my concern. I don’t care about others’ performance because all I have to do is focus on mine. The most important thing for me is to finish the programs without making mistakes so I can be satisfied with my last performance in the Olympics. ”

The free program begins tomorrow, midnight Korea time, at the same place. The order of the performances will be decided tomorrow.