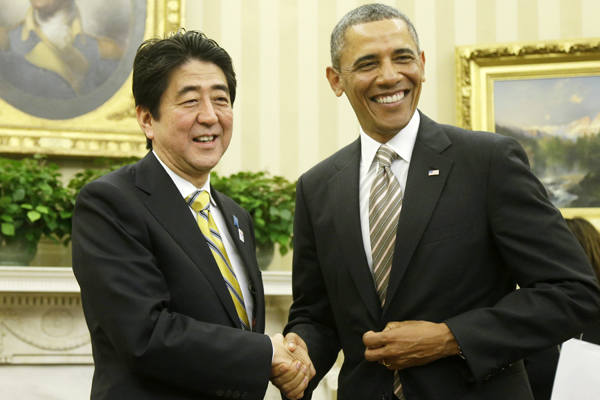 A large tent was created on the South Lawn of the White House and 350 guests were invited. “Vive la France,” Obama said as he proposed a toast. When a French reporter asked the U.S. president whether France has become Britain’s equal in the eyes of the United States, Obama delighted Hollande by saying, “I have two daughters, and they are both gorgeous and wonderful, and I would never choose between them.”

France is one of the oldest allies of the United States. The country helped the United States during the American Revolutionary War, and U.S. troops shed blood for France during the two World Wars. But since then, the two nations have had something of a love-hate relationship.

France opposed the George W. Bush administration’s campaign against Iraq in 2003. Afterward, “French fries” disappeared from the cafeteria menu of the White House and “Freedom fries” replaced them. But today, France supports America in the international community as its second battalion.

During the Libyan crisis in 2011, the French led the attacks on supporters of dictator Muammar Gaddafi, while the United States stayed in the back. On issues relating to Syria and Iran, Paris and Washington are in step. France is also leading military interventions in Mali in its civil war against Islamic militants, as well as the Central African Republic. The European nation has dispatched 6,600 troops to Africa including Somalia, Chad and Cote d’Ivoire.

In the Middle East and Africa, France is working on the missions that the United States used to have. It can be referred to as burden-sharing, but strictly speaking, it is outsourcing. Compared to the interests that the United States earns by shouldering the burden on France, the money spent on Hollande during his recent visit was nothing more than a fraction.

Another European country that Obama pursues in his “outsourcing” diplomacy is Germany. The United States is actively supporting the expanded military role of Germany in the global community. And Germany responded, “Why not?”

In his keynote speech last month at the Munich Security Conference, German President Joachim Gauck expressed Germany’s intention to expand its military role in international conflicts. It is clearly wrong for Germany to hide behind its original sin in history and abandon its responsibility toward the international community, he said.

The key partner for Obama’s “outsourcing” diplomacy in East Asia is Japan. A “pivot” to Asia and “rebalancing” are the two key words in this plan. In fact, he wants Japan to do some difficult work for the United States - Obama wants to check China through Japan’s expanded military role. Japanese Prime Minister Shinzo Abe is dancing enthusiastically to the music Washington is playing.

Although he promoted “assertive pacifism” to contribute to the peace and stability of East Asia as a responsible member of the international community, his true intentions are to escape the shackles of the San Francisco Peace Treaty, which has restrained Japan for the past 70 years, and become a normal state with the rights of aggression. This is why Abe is going after amending the Constitution or changing constitutional interpretation to secure the right to collective self-defense.

But Japan’s neighbors are looking at the move very differently than toward Germany. There is no need to say again that Germany has faced its past and sincerely atoned for it, but Japan has failed to do so. If Abe made a remark equal to what Germany’s President Gauck said, East Asia must have faced another crisis.

Japan’s wish to escape from the grip of its post-war regime is understandable. China’s rise has elevated the value of Japan, and it is undeniable that Japan is facing the best opportunity. If it can maintain a strong alliance with the United States while creating cooperative relations with Korea and China, Japan can play the role of mediator between the United States and China.

When the U.S.-Japan alliance becomes a horizontal axis, while the Korea-China-Japan trilateral cooperation becomes the vertical axis, Japan’s diplomatic horizon in East Asia will expand far more than we can imagine. Japan must learn a lesson from Germany, which leads Europe using the North Atlantic Treaty Organization and European integration as its two axes. It is possible if Japan offers an honest apology for its past and decides to postpone territorial disputes. I want to believe Abe has such a vision and courage.