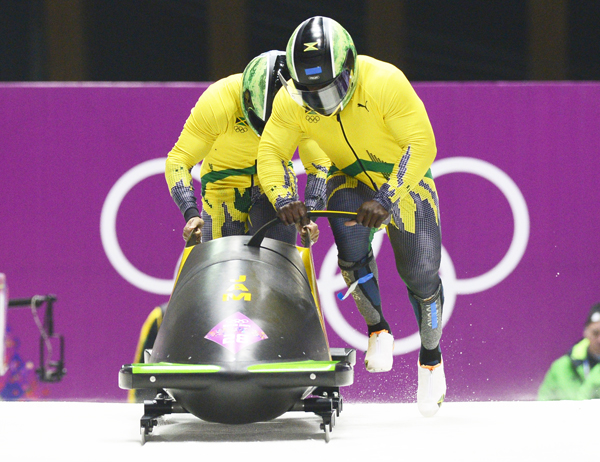 The Jamaican team, piloted by Winston Watts with Marvin Dixon, competes in the two-man bobsleigh on Sunday. [USA TODAY/NEWS1]

Larger than life Jamaican driver Winston Watts, who had just steered his bobsleigh for the third and final run, laughed and joked his way through a forest of TV crews and reporters and looked like he was about to catch his death of cold.

Then he spotted a familiar face alongside the finish area at the Sliding Center Sanki and erupted into a belly laugh.

The man wearing the baseball cap among a throng of excited volunteers wielding camera phones and autograph pads was none other than Monaco’s Prince Albert, although few noticed in the clamor to be snapped with Jamaica’s cult heroes.

“You’re looking in great shape, man!” Prince Albert said as the two men from vastly different backgrounds, but joined by their passion for bobsleigh, high-fived and joked like old buddies.

It was a brief snapshot of the magic of the Olympic Games on the night the 46-year-old Watts may have steered a tube of gleaming black steel down an Olympic ice chute for the last time.

Prince Albert made his Olympic bobsleigh debut in Calgary in 1988, when the Jamaican four-man team that inspired the movie “Cool Runnings” also made its debut.

Watts was not part of that original foursome but took part in 1994, 1998 and 2002 before returning this year to help Jamaica put a sledge on the starting line after a 12-year gap.

With brakeman Marvin Dixon, they caused quite a commotion at the Sochi Games, even if they finished 29th out of 30, only courtesy of Serbia’s crew failing to start their third run.

Watts and Dixon had to raise $80,000 through an Internet appeal even to be able to take their place in Sochi after scraping through the qualification process.