Sharklet’s success shows the other side of KAL

Sharklet’s success shows the other side of KAL 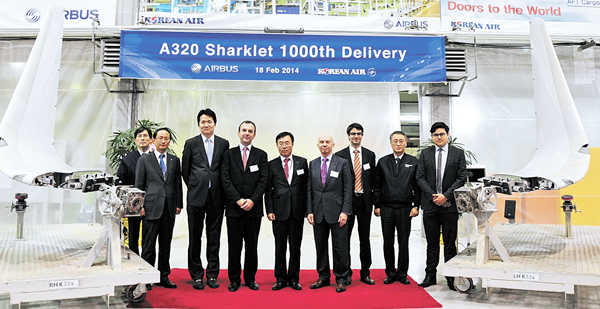 BUSAN - Most people recognize Korean Air Lines as the nation’s largest commercial airline with award-winning cabin service. Behind its reputation, however, the Hanjin Group affiliate also manufactures parts and develops unmanned aircraft and even satellites.

About 20 minutes away from Gimhae International Airport in Busan is KAL’s aerospace division tech center. Founded in 1976 on a 706,000-square-meter (174.5-acre) site, the tech center has been the nexus of company efforts to generate new growth engines.

The goal of KAL’s aerospace business division, which currently employs about 2,700 people at four plants, is to reach sales of 1.1 trillion won ($1.03 billion) by 2015. It has shown promising results for the past five years, with an average annual sales growth of 25 percent. Last year it had sales of 764.2 billion won, more than 6 percent of the airline’s total revenue, and is expected to account for about 8 percent in 2014.

One of the division’s biggest success stories is the Sharklet, a curved wing-tip attachment that boosts aircraft fuel efficiency. KAL says cumulative Sharklet sales should reach 400 billion won by 2017. Yesterday, the company took a step toward that goal when total Sharklet sales to Airbus reached 1,000 units, 22 months after its first delivery in April 2012. 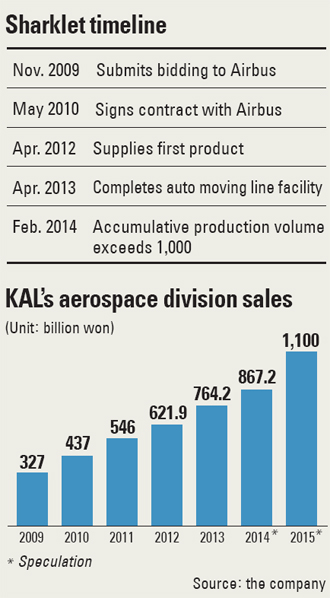 “We have been impressed by KAL’s high quality and cost-efficient production,” said Tom Williams, executive vice president of the France-based aircraft manufacturer.

KAL bid to supply parts for the Airbus A320 in November 2009 and was selected in May 2010. The company said the Sharklet is unique in its use of advanced composite materials in which carbon fibers are aligned in one direction. Sharklets installed on the A320 decrease air resistance and boost fuel efficiency by 3.5 percent, reducing the aircraft’s CO2 emissions by 3,600 tons a year.

Aircraft parts are typically produced on a small scale. However, because Airbus and other airlines are requesting Sharklets for other A320 series aircraft such as A318, A319, A321, KAL said it established an auto-moving production line at the tech center’s commercial jet plant last April that produces two Sharklets a day, or an average of 50 in a month.

The air carrier is developing Sharklets for the Airbus A320neo series, and since 2012 it has been manufacturing three to five cargo doors per month for the Airbus A350. Last October, it also won orders from Boeing to supply 737MAX winglets.

KAL said it plans to make the tech center a core business unit and is negotiating with Busan city’s government to build another facility.

“We are talking about land and other details with the government, and I think the initial deal could be inked this year if everything goes well,” said Cho Won-tae, KAL’s chief marketing officer and the only son of Hanjin Group Chairman Cho Yang-ho. “Probably in next three or four years, we can make an aggressive investment.”