Wearable age of electronics kicks off in Spain

Wearable age of electronics kicks off in Spain

Electronics companies are rolling out health-related wearable devices hoping for some hit products.

Samsung Electronics and Apple are preparing to launch health-related smart devices, while LG Electronics and Sony have already unveiled smartwatches with health-check functions.

Samsung and LG are going head to head with their devices at the upcoming Mobile World Congress, which kicks off on Feb. 24 in Barcelona, Spain.

Samsung plans to introduce its smartwatch Galaxy Gear 2 at the MWC and LG will show its Lifeband Touch fitness tracking wristband, which was released at the Consumer Electronics Show last month.

“Electronics manufacturers’ competitive launches of health-related wearable devices is the opening of the wearable market and an attempt to shift consumers’ attention to smart health devices,” said a local market analyst.

Wearable devices are regarded as the most promising new business in the electronics industry, especially for makers of smartphones, which is becoming an increasingly saturated market. Electronics companies are seeking a breakthrough industry in the wearable electronics market.

LG’s Lifeband Touch is a wearable device equipped with health care and fitness features besides the basic clock function. It can monitor calories burned and the wearer’s heart rate.

With an organic light emitting diode (OLED) display and a touch screen, a user can check functions by flipping the screen from left to right. 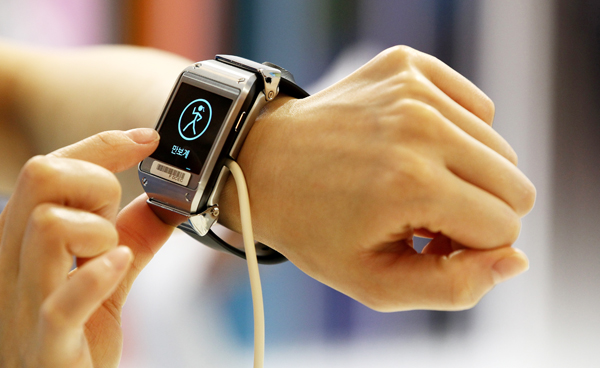 A user tries on the Galaxy Gear, an Android-based smartwatch launched by Samsung Electronics last September. Samsung is launching the Galaxy Gear 2 at the Mobile World Congress on Feb. 24. [Bloomberg]

It is designed as a circular band so it can be bent to fit users’ wrists. In addition, it comes in three sizes: large, medium and small.

It weighs 47 grams (1.6 ounces) and can be used in various outdoor activities. It is waterproof and has a long-lasting battery, which can play music for more than five days on a charge.

It comes with earphones that can measure the heart rate and blood pressure from the ear by checking blood flow. Users can see the statistics before, during and after exercise.

Meanwhile, Samsung’s Galaxy Gear 2 is also expected to be equipped with a variety of health care functions. “Fitness” and “life” were keywords in Samsung’s teaser invitation to the release event.

The Galaxy Gear 2 will have a new design and a flexible OLED display. The first Galaxy Gear introduced with the Galaxy Note 3 last year is relatively heavy to be worn on the wrist with its 1.63-inch Super Amoled display.

Samsung announced at its annual earnings release on Jan. 24 that it would upgrade the colors, materials and design for the Galaxy Gear 2 to make it more fashionable.

Besides the Galaxy Gear 2, the industry forecasts that Samsung could release another wearable fitness wristband, possibly called the Galaxy Band, at the MWC 2014.

Apple is also forecast to launch its own wearable device, the iWatch, within this year.

It is expected to offer functions such as treating sleeping disorders and measuring blood pressure and the heart rate.

“It takes a lot of time for any product or a market to be established and stabilized, and how much time will depend on how attractive the new devices are to consumers,” said an industry source. “Electronics companies jumping into the health care and fitness business is part of their efforts to attract consumers to wearables as smartphone markets are already saturated.”

Google’s wearable Google Glass has health care applications that can be used in operating rooms by medical professionals.

Wearable devices are also regarded as a possible new growth engine for the industry by the Ministry of Science, ICT and Future Planning along with 5G mobile communications, big data, smart cars, intelligent robots and hybrid renewable energy.

Some industry analysts believe the wearable devices could change health care as a whole when they are incorporated with big data and the Internet of Things.

The market research firm Juniper Research said it predicts the world’s wearable computing device market to grow to $19 billion by the end of 2018.