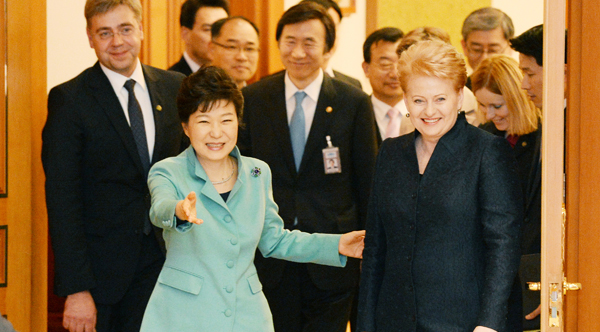 President Park Geun-hye yesterday stressed the need for a fundamental measure to make it possible for families from North and South Korea separated during the 1950-1953 Korean War to have reunions more often.

“Those who had applied for reunions but died before the meeting were found to total 3,800 last year alone,” the president said in a cabinet meeting at the Blue House.

“The reason North Korea should be more proactively engaged in this problem is because the citizens - who are heartbroken from not being able to meet their siblings - exist not only in South Korea but also in the North. Both Koreas should cooperate toward easing the long-held sorrow of all of those separated families.”

Two weeks ago, Park made light of the current way in which reunions are conducted sporadically, causing some families to wait for their siblings on the other side of the border indefinitely. She also ordered officials from the Ministry of Unification and other related government institutions to consider joining hands with the International Committee of the Red Cross to make additional efforts with North Korea.

Underlying Park’s comments is the hope that the reunions will become regular events, according to her aides.

“Reunions are an issue President Park prioritized ever since she was a lawmaker. She has very strong views about it,” said a Blue House official.

Later in the day Park met with Edward Royce, chairman of the U.S. House Committee on Foreign Affairs, and his delegates at the presidential office.

Noted to be supportive of Korea in regard to Korea-Japan conflicts, the congressman paid his respects last month at a statue in Glendale, California, that commemorates the women who were forced into sexual slavery by the Japanese military during World War II.

The statue was the first of its kind to be raised in a foreign country to honor those widely known as “comfort women.”

The president told him that Koreans were moved by his visit to the monument, where he expressed his condolences to Hwang Geum-ja, a former victim of sexual slavery who passed away late last month at age 90 in Seoul.

“There are only 55 of those elderly ladies who suffered unforgettable pain throughout their lives and in their youth who are still alive. A number of them have already died and another passed away last year,” the president said. “I think this problem should be resolved as soon as possible.”

Last week, New York Senator Tony Avella, who has been an active voice on the comfort woman issue, proposed a resolution to promote state textbooks that argue that imperialist Japan’s coercion of women into sexual slavery was a crime against humanity. If passed, the bill could take effect as early as July.

The president’s meeting was followed by a summit with Lithuanian President Dalia Grybauskaite, the first female president of the country, who is often referred to as the “Iron Lady.” This is her second visit to Seoul since she took office.

“Lithuania and Korea forged diplomatic ties in 1991 and a friendly relationship has been evolving ever since,” Park said. “I hope the cooperative momentum between the two countries improves and wish for further collaboration in a variety of fields.”