A collapse leave 10 dead and two in criticial condition

A collapse leave 10 dead and two in criticial condition 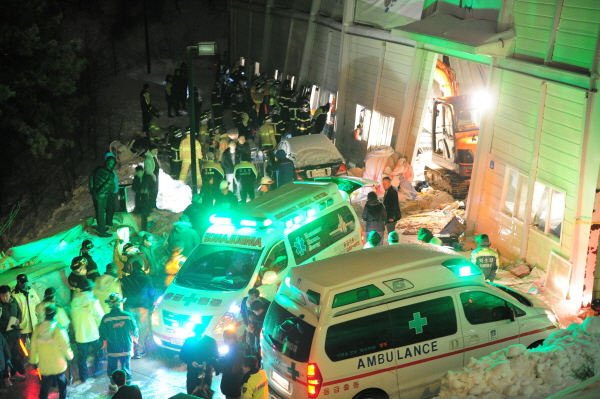 A gymnasium at a resort place in Gyeongju, North Gyeongsang, collapsed last night under the heavy weight of snow, killing 10 students and injuring over one hundred of students.

The roof of the gymnasium at Mauna Ocean Resort, located on a mountain in Gyeongju, collapsed at 9:06 p.m. yesterday, trapping 565 students from the Busan University of Foreign Studies who were attending an welcoming ceremony for incoming first-year students.

According to the police, 113 students fell victim to the accident, including the 10 dead. Nine of the 10 dead are students while one of them is from an event organizing company hired by the school.

A total of 101 students suffered minor injuries while 2 are in critical condition, according to the authorities, adding that the toll could rise as the rescue work progresses throughout Tuesday. Nearly 1,500 rescue workers and soldiers are dispatched to the scene carrying out the rescue work. 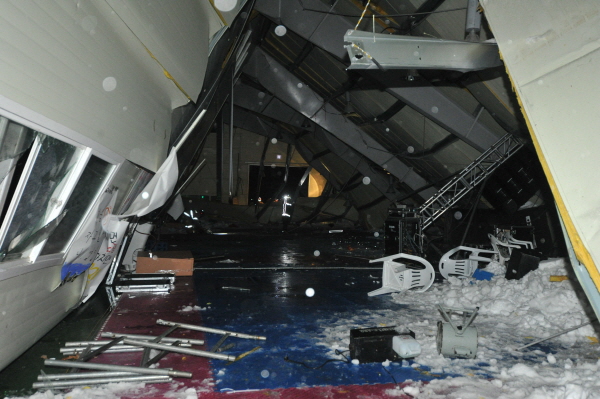 The police said the collapsed building had only one exit door for trapped students and will look into whether the building failed to meet safety standards, adding there were accumulated 50 centimeters (19.6 inches) of snow on the roof at the time of the collapse.

Rescue workers struggled to get inside and bring injured students out of the building because the building was located in mountains and it was still snowing Monday night.

The authorities speculate it was heavy snow atop the building the caused the fatal collapse and said they will question resort officials why they did not remove the snow prior to the school’s event.