Record snowfall on the east coast is unrelenting

Record snowfall on the east coast is unrelenting 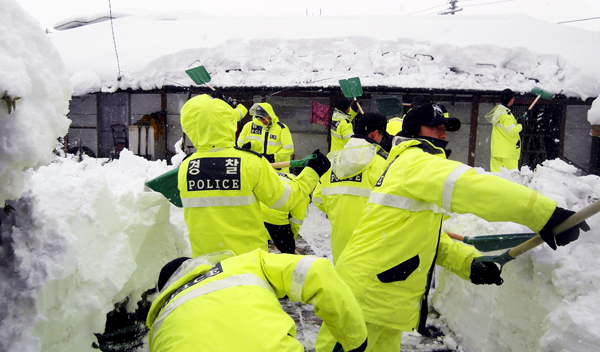 Policemen remove a mound of snow yesterday from the roof of a house in Donghae, Gangwon. [NEWS1]

The east coast of Korea was hit by prolonged snowfall for nine consecutive days, the highest on record since meteorological observation began in 1911, and so far it appears to be unrelenting, having led to multiple deaths over that period.

The snow was so heavy that it caused the roof of a gymnasium at the Mauna Ocean Resort in Gyeongju, North Gyeongsang, to collapse on Monday night, killing 10 people and injuring more than 100.

The weather station nearest to where the accident occurred, at Toham Mountain, located 10 kilometers (6.2 miles) north, reported 97.5 millimeters (3.8 inches) of precipitation from Feb. 6 to Monday - about six times the annual winter season average between 1981 and 2010.

The snow was heavier than usual, authorities suspect, because of the blanket of sleet that hit the region. Experts say the weight of the snow could have been as much as 100 kilograms per one cubic meter (35 cubic feet) if the weather conditions were consistent with those recorded by weather stations.

In Ulsan, the roof of an automobile repair center collapsed on Feb. 11 due to heavy snow, leaving one man dead and two injured, police said.

According to authorities, the roof of the building was unable to support the weight of the snow.

The man killed was a 37-year-old worker, only identified by his surname Lee. The injuries sustained by the two other men were not life-threatening, they added.

The incident there followed a similar weather-related accident in which a man, whom police would not identify, was killed on Feb. 10 after the roof of an auto parts factory in Buk District collapsed from the snow.

Meteorologists said the east side of the country was hit by such heavy snow because Korea is currently trapped between high pressure winds in China, which blow a cold snap downward and lead to frosty conditions, and low pressure winds south of Korea, in which humid air is sent upward, causing wet, cloudy weather.

Additionally, they say, high pressure winds over the Kamchatka Peninsula slow those high and low pressure currents moving east, which extends the period of snowfall.

“Humid air from the sea turned into snow clouds while climbing up mountains [that stretch along the east coast], hitting the east coast with heavy snow,” said Ho Chang-hoi, a professor at the Seoul National University School of Earth and Environmental Sciences. “On the contrary, the temperature on the other side of the mountain went up due to the Fohn phenomenon [dry, warm wind that runs down the slope of a mountain range].”

“Atmospheric disposition formed as the continental anticyclone [large-scale winds that circulate around a region of high atmospheric pressure] weakened in February, which let a low pressure current pass by Korea, north of its usual course,” said Jeong Gwan-young, spokesman for the Korea Meteorological Administration.

Since 1990, there have only been eight instances in which more than 30 centimeters of snow has fallen in Gangneung in February. And snowfall in that area is rare.

Gangneung and Sokcho, in Gangwon, received an additional five centimeters of snow on Monday and Tuesday. Snowfall in Gangneung yesterday was 72.2 centimeters.

The weather administration forecast yesterday that the east coast will see snowfall today during the day, and again tomorrow afternoon.