For Koreans, Olympics no longer all about gold

For Koreans, Olympics no longer all about gold 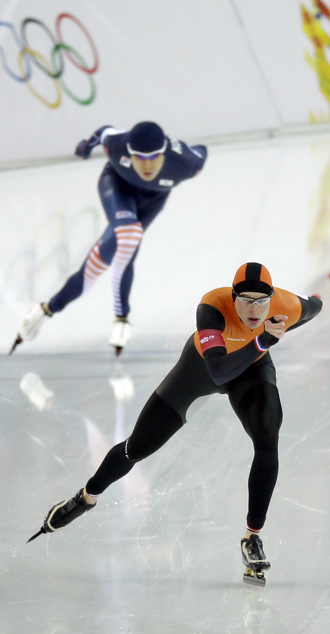 Lee Seung-hoon races behind the Netherlands’ Sven Kramer in the men’s 10,000-meter speed skating on Tuesday at Adler Arena in Sochi, Russia. Lee finished in fourth place, wrapping up his competition in the Olympics. [AP/NEWSIS]

For Korean athletes, an international event like the Olympic Games is a stage to show off their skills and, sometimes, to become a national star. Speed skater Lee Sang-hwa, 24, instantly became famous after she won the women’s 500 meters - Korea’s first gold medal in Sochi.

Days after her win, members of the media covered every aspect of her story, from what kind of food she eats to where she goes to decorate her nails.

Sports have always been a helpful device to promote national consciousness in Korea’s modern history. Since the triumph of the nation’s first Olympian, Sohn Kee-chung, ran the marathon at the Berlin Summer Olympics in 1936, gold medalists were praised as national heroes who promoted “Korean pride” to the world.

It was thrilling for the people of the war-torn country to see its young athletes beating those from the world’s superpowers. In those days, winning gold medals was viewed as a sacred mission for the national team, which sometimes led them to submit to uncompromising and violent training.

However, such practices seem to be going out of fashion in Sochi. These days, Korean athletes are truly enjoying their Olympic moment by appreciating their achievements, regardless of the medals they achieve.

When Lee Seung-hoon failed to win a medal in the men’s 5,000 meters speed skating in the first week of the Sochi Games, he seemed like he was shocked and disappointed at himself because he was the silver medalist in the same event at the 2010 Vancouver Games. Fans and media expected that the 24-year-old would win the nation’s first medal in Sochi, but he finished in 12th place.

After the race, he refused to do interviews and left the rink in a hurry. All he said to reporters was, “I’m sorry for disappointing the nation.”

On Tuesday evening, Lee raced in the men’s 10,000 meters, in which he won the gold in 2010. The public’s concern was whether the young skater had recovered from his failure in the 5,000 meters. Judging only by the outcome, it was hard to say, because he finished in fourth place with a time of 13:11.68. Skaters from the Netherlands, who have been dominating the mid- and long-range speed skating events in Sochi, won all three medals.

When Lee met Korean reporters after the race, however, he looked like he wasn’t mad or disappointed in himself, as people feared. Instead of saying, “I’m sorry,” he said, “I’m satisfied that I was able to skate much better than I did in the 5,000 meters event. I think I can skate in a better mood in the future with a new goal - to show a better performance in the 2018 Pyeongchang Olympics.”

He continued, “I think I was too depressed after the 5,000 meters, and I think I forgot what it truly means about being a part of the Olympics at that time. I realize that winning a medal isn’t everything.”

“I’m very happy for the silver medal,” beamed Shim during the flower ceremony after the women’s 1,500 meters on Saturday. “Right after the race, I was a bit disappointed that I finished second.”

She was in the lead, until Chinese skater Zhou Yang grabbed the lead two laps before the end of the race.

“But I’m really satisfied with my silver medal,” said the 17-year-old skater. “After all, I only made my debut in the Olympics.”

If Shim made such remarks decades ago, she would’ve been bombarded with criticism for being “irresponsible.” In fact, when Korean athletes won silver and bronze medals in the Olympics, they apologized sincerely for “letting down the country.”

“Throughout the years, true sportsmanship was overshadowed by nationalism,” said sociology professor Shin Kwang-young of Chung-Ang University. “However, after seeing the world’s citizens truly enjoying the Olympics without any strings attached, Koreans started to remove nationalist sentiment from players’ performances.”

Shin added that Korea’s mature civil society has helped create such an environment.

“Journalists should also hold responsibility,” said Professor Lim Woon-taek of Keimyung University. “Over the past years, the mass media reinforced the notion that gold is the only medal worth winning.”

In fact, members of the foreign media have expressed their disgust over Korea’s obsession for gold throughout the years.

Yet the Sochi Games seem to mark a turning point. When covering short tracker Park Seung-hi’s bronze medal in the women’s 500 meters, local news reports focused more on her victory, rather than the type of her medal.

Not only that, but veteran skater Lee Kyou-hyuk’s 24-year Olympic journey was celebrated by Koreans. Although he hasn’t won any medals in his six Winter Games, people focused more on his relentless efforts to advance his abilities.

It seems like Koreans have finally started enjoying the Olympics.