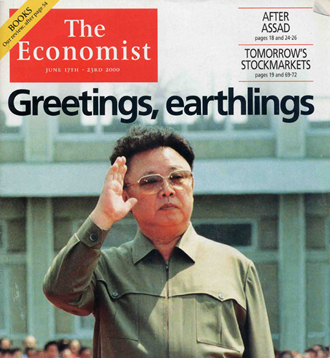 I’ve often thought that my finest moment in more than 20 years working for the Economist was a cover we ran on North Korea in June 2000. The editor was away that week, so what we did with the cover was my call. The hitherto reclusive Kim Jong-il had just appeared before the cameras, looking wonderfully absurd. Graeme James, the paper’s (brilliant) art editor, showed me the photograph and said, “Greetings, earthlings.” I don’t know if Graeme intended it for the headline, but that was that.

People still mention it to me unprompted as their favorite Economist cover. Yet reading the UN report on North Korean atrocities, I felt a small pang of shame.

As Bloomberg View says today, the Kims are all too easy to mock, but mockery really isn’t the right response. The right response is disgust. I think we can agree there’s something funny about a chubby central planner with a perm, designer glasses and a romper suit, gravely accepting applause while his country sets the standard for economic failure. On the face of it, Kim Jong Il’s pudgy offspring has similar comic potential.

However, even recognizing that incompetence at sufficient scale can cause enormous suffering, the elaborate cruelty documented in the UN’s catalog of horrors belongs in a different category. One that forbids satire.

It was a memorable cover, but there’s nothing funny about North Korea.