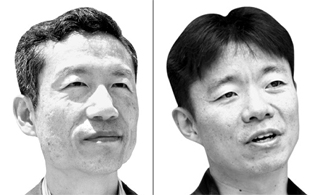 The president of Radio Free Chosun and a senior researcher at the Network for North Korean Democracy and Human Rights, or NKnet, Lee is now active in spreading awareness about the human rights situation in the North. But he was previously a member of the National Democratic Revolutionary Party. Lee Seok-ki had also been in a leadership position of the party in the 1990s, he acknowledged.

Founded in the early 1990s, the National Democratic Revolutionary Party - also known by its Korean abbreviation as Minhyukdang - was disbanded in 1997 by its leader Kim Young-hwan, who, after meeting Kim Il Sung in person, became disillusioned by the dictator’s ideology.

Two years later, the group was publicly revealed, and became known and labeled as an antistate organization formed on Kim’s ideas about leadership. Many of the hard-line student activists of that time are alleged to be current members in the UPP.

“I myself was a member of the National Democratic Revolutionary Party’s RO,” Lee Kwang-baek admitted. “At that time, there was the party leadership, the RO, as an advisory unit, and under that there was the Revolution Mass Organization. The RMO was mainly comprised of labor and agricultural unions, and the RO drew in activists committed to Kim Il Sung’s Juche ideology who also had anti-U.S. sentiments.

“When joining the RO, we pledged our life to Kim Il Sung. Representative Lee [Seok-ki] also made his members join his RO in a similar way,” he added.

A whistle-blower in the UPP-connected RO said during testimony in Lee Seok-ki’s trial that group members had been asked, “Who is our leader?”

And they would respond accordingly: “Kim Il Sung.”

“So that the organization would not be revealed, the National Democratic Revolutionary Party usually held meetings between two or, at most, five members,” the activist said. “You couldn’t meet higher officials except for your direct commander. Because of these rules, I only knew the identity of the party’s chairman, Kim Young-hwan, after the [1999] incident.

“In a sense, it should not be taken for granted that the informant learned of the existence of Representative Lee only later, even after 10 years in the RO,” he added.

On Monday, Representative Lee of the minor opposition UPP, was convicted of conspiring to overthrow the government in the event of a war with North Korea. It marked the first rebellion conviction in Korea in 34 years.

Last fall, Lee and other members were accused of plotting a rebellion against the government in May, meeting in a building in Mapo District, western Seoul. He was sentenced to 12 years in prison and stripped of the right to vote or run for office for 10 years following his release from jail.

Lee Kwang-baek said that after the existence of the organization became known to the public, “it appears that Representative Lee Seok-ki, at that time, imitated the RO structure.”

He added that in the National Democratic Revolutionary Party, “it appears Representative Lee oversaw around four RO regional groups.”

Lee Seok-ki was arrested in 2002 for his activities in the National Democratic Revolutionary Party and for violating the National Security Law. He was sentenced to nearly three years in jail but was released in 2003 after a special pardon by President Roh Moo-hyun.

Kim Young-hwan, 51, who led the National Democratic Revolutionary Party and went on to be a key founder of North Korean human rights civic group NKnet, told the JoongAng Ilbo, “I feel responsibility as the person who first started such an organization… If you see the records of the investigation, the lessons [from] the National Democratic Revolutionary Party are still in use. It’s as if I taught them.”