Police search for leads in collapse

Police search for leads in collapse 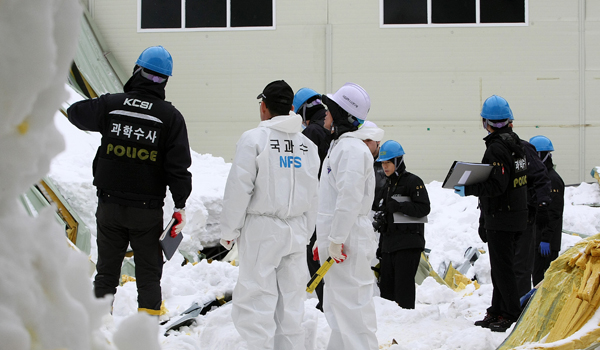 Investigators yesterday carry out on-the-spot examinations to find out how the gymnasium collapsed in the Mauna Ocean Resort in Gyeongju, North Gyeongsang, killing 10 people. By Gong Jeong-sik

The police launched a widespread investigation yesterday to determine what caused the roof of a gymnasium to collapse at the Mauna Ocean Resort in Gyeongju, North Gyeongsang, which left 10 people dead and 105 injured.

According to the North Gyeongsang Fire Service Headquarters, the roof of the gymnasium at the facility collapsed at 9:06 p.m. on Monday, while 560 students from Busan University of Foreign Studies were holding a welcome party for incoming freshmen in the southeastern city of Gyeongju, about 370 kilometers (229 miles) from Seoul.

The police conducted a joint on-site inspection with the National Forensic Service (NFS) and structural engineers yesterday to identify potential flaws in the design of the building, which sits at an elevation of 500 meters (1,640 feet) on the top of Mount Dongdae.

The investigation team is also studying the architectural blueprint of the building to determine whether it was constructed in a sound way with satisfactory materials.

“We are looking into any possible reasons as to why the building could have collapsed and will have an in-depth look at how the gymnasium was built based on the construction blueprint and the materials,” said Koh Jae-mo, an official from the NFS.

The collapsed gymnasium was a pre-engineered building that used roof panels and rigid frames along with light gauge metal wall cladding. These types of buildings are designed to be flexible and are mostly used as storage units.

“We have so far questioned 20 people, including students, employees at the resort, and an event organizer,” said Park Jong-hwa, a detective with the North Gyeongsang Police Agency on the investigation team.

The police are also working to recover a video clip filmed during the welcome ceremony, which was retrieved from a damaged video recorder found at the site, in the hopes that it can provide crucial clues for the cause of the accident.

Authorities are expected to bring charges against the employees at the Kolon-owned resort for breach of trust and negligence, as they did not remove the 50 centimeters (19.6 inches) of snow that had accumulated on the roof and neglected to maintain building safety regulations.

The police are also not ruling out the possibility that members of the university’s student council might have taken money from the event organizer, ACT Entertainment, in exchange for letting it host the party at Mauna Ocean Resort instead of another venue initially booked for the event.

The party was originally scheduled to be held at the Kensington Resort in Gyeongju. However, for reasons unknown, the organizer later changed the venue to the Mauna Ocean Resort, which is owned and operated by the Kolon Group, a textile company with 38 affiliates.

A 31-year-old ACT Entertainment manager, identified only by his surname Sim, was questioned by the police yesterday on the terms of the contract he signed with the student body.

Meanwhile, the Kolon Group, which released a public apology a day after the incident, reached a deal with the families of the nine students killed in the collapse, agreeing to pay a sum in the 50 million won ($46,900) range for each victim.

As of 5 p.m. yesterday, Busan University of Foreign Studies was still in discussions with the families over compensation.