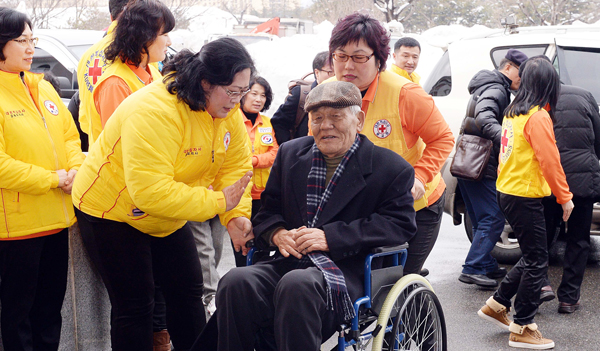 Jang Ho-jin, 85, arrives in a wheelchair at the Hanwha Resort in Sokcho, Gangwon, yesterday en route to the reunions of families separated by the 1950-53 Korean War. A total of 82 South Koreans will head to Mount Kumgang in North Korea today, accompanied by 58 friends or family members. [NEWS1]

A total of 82 South Korean seniors departed yesterday for the Mount Kumgang resort in North Korea to attend the much-anticipated reunions of families separated for six decades, the first such humanitarian event held in almost four years.

The South Korean delegation stayed a night at a resort in Sokcho, an eastern coastal city, while on their way to Mount Kumgang where six days of reunions are scheduled. They attended an orientation and will depart for North Korea at 9 a.m. today.

The 82 seniors were selected for the first three days of reunions and will meet 178 North Korean relatives starting from today. The seniors are accompanied by 58 younger relatives from the South.

According to South Korea’s Ministry of Unification, 67 of the 82 applicants are in their 80s or 90s. The oldest is 96-year-old Kim Seong-yun, who will be meeting her 82-year-old sister and other relatives in the North. Answering questions from reporters, Kim appeared to be healthy and prosperous and wore a luxury fur coat.

Many seniors entered the resort in Sokcho in wheelchairs provided by South Korea’s Red Cross. A 91-year-old man who came down with a cold was moved on a stretcher with a drip.

When the reunions were first planned, a total of 100 South Koreans were supposed to be involved. But 18 dropped out due to illness or because their North Korean relatives refused to meet them. Some also died.

The families will arrive in Mount Kumgang at around 1 p.m. before having group meetings at the Mount Kumgang Hotel between 3 p.m. and 5 p.m. They will wrap up today’s schedule with a dinner party hosted by North Korea at the hotel.

After the first set of reunions through Saturday, South Korea will host the second set from Sunday to Tuesday, in which 88 North Koreans will be reunited with 372 Southern relatives under the same schedule.

“We are doing our best to hold the family reunions by working on clearing the snow,” Park Soo-jin, deputy spokeswoman of the Unification Ministry, said at a daily briefing. “At the moment, we anticipate no problem in holding the reunions.”

“It’s been 63 years since I’ve met with my sisters,” said Mun Jeong-a, an 87-year-old who is being reunited with two younger sisters. “What I want to know most is about my hometown.”

Mun said she had five siblings but three died.

“I was the only one who got a fishing boat heading to the South,” she said. “My father was dragged into the Communist army of North Korea and my mother told me to escape alone, so I couldn’t bring my siblings.”

Gang Neung-hwan, a 93-year-old from Hwanghae Province in North Korea, said he will meet his 61-year-old son for the very first time.

“I was separated from my wife in 1951, just four months after the marriage,” Gang said. “I don’t even remember my wife’s name and have no special memories of her.”

In a flood of refugees, Gang came to the South with his elder brother.

“I didn’t know my wife was pregnant as her belly was not swollen at the time,” he recalled. “When I applied for the reunions, I heard that I have a biological son born in North Korea.

“As I don’t know anything about him, I have tons of questions for him,” he said. “I want to know his job and the name of my wife and whether they lived in Pyongyang or not. I also wonder whether he looks like me.”

Kim Myeong-bok, 66, brought the will left behind by his father when he died 10 years ago. He wanted to show it to his 68-year-old North Korean elder sister.

During the war, their parents brought him and his younger sister South, but they were forced to leave their eldest daughter in North Korea.

“My father wrote in his will, ‘Although I’m dying, you should find your sister,’?” Kim said.

Gifts for North Koreans will be limited. The families from the South are not allowed to give luxury items or jewelry. The presents have to fit in several bags, with each weighing no more than 30 kilograms (66 pounds).

“I prepared three down jackets and three hanbok dresses,” said Go Jae-jun, an 81-year-old man who is being reunited with his 72-year-old younger sister. “Since I don’t remember much about her, the only thing I can say to her is ‘Thank you for staying alive until now.’?”