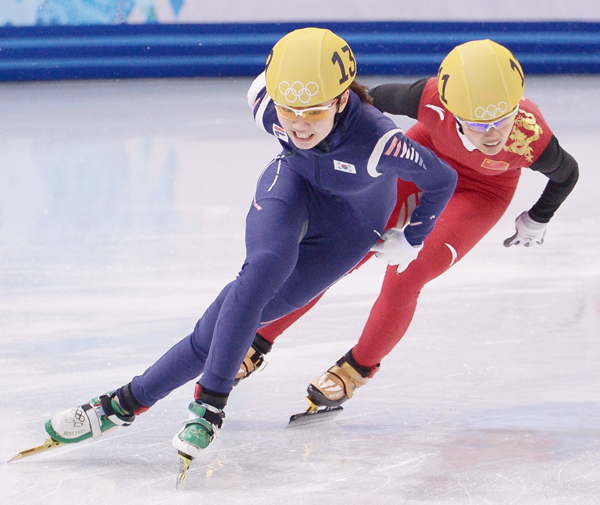 There was only a half lap left and Korea was behind China in the women’s 3,000-meter short track speed skating relay final on Tuesday. Commentators and analysts broadcasting the event, as well as fans watching the race on television, were shouting “Don’t give up!” But, in the back of their minds, most were really thinking, “God, we lost again.”

At that moment, the 17-year-old Shim Suk-hee moved to the outside of the lane and started to pick up speed. With a burst she overtook China’s skater Li Janrou and crossed the finish line first.

That amazing half-lap by Shim was more than just the first short track gold medal for Korea at the Sochi Games; it also ushered in a new era for women’s short track in Korea.

Traditionally, Korea has been successful in short track thanks to petite skaters who can fly fast around corners. Chun Lee-kyung, 38, and now retired, is just 164 centimeters (5-foot-5) tall but won two golds in the 1994 Lillehammer Games and two more at the 1998 Nagano Winter Olympics. Jin Sun-yu, 25, also has a height of 164 centimeters, but she won three golds in the 2006 Turin Games.

Shim, however, is 174 centimeters tall. The way she won that relay race showed her amazing stamina - the same strength that propelled Lee Sang-hwa to gold in the women’s 500 meters.

Analysts say it is especially hard to take the lead in the last lap because that is the time when most skaters run out of fuel.

“She skated half of the last lap on the outside of the race lane, reaching her maximum speed of the night,” said Jin, who is now the coach of the Dankuk University short track team. “She is the type of skater we haven’t seen on the Korean short track team. Passing someone in front of you on a corner by using the inside of the lane is a lot easier if you can generate some instantaneous speed, but if you try the same thing in the outer lane, it is a whole different story.”

Ahn Sang-mi, a commentator for SBS, said the trend of short track racing is changing. “It’s just getting harder every year to pass a competitor on corners because skaters know that taking a good position on the inside of the lane is extremely important. That is why so many skaters are falling down in races, after challenging each other on corners,” she said. “It means that skaters now need to be capable of increasing their speed fast enough to pass someone from the outside. Most athletes can do that over a short distance, but not so many are capable of doing it like Shim did.”

Shim was considered the strongest contender in the 1,500 meters, but she finished that race in second place. She told the media afterward that she was overwrought because she knew the nation was desperate for gold. But, by winning her first Olympic gold in Tuesday’s relay, analysts predict that Shim should be able to race more comfortably in future.

The women’s short track team has one more race left, the 1,000 meters, which begins at 1:30 a.m. Saturday (Korea time). Shim, Park and Kim A-lang will all race in the quarterfinals. All three won their heats on Tuesday, showing that they are in good shape.

“I already forgot about Tuesday’s gold medal because the Olympics aren’t over yet,” Shim said. “I will try to focus on the coming event to finish off the Sochi Games well. I ask the nation to support us, just like they have been doing over the recent weeks.”

The men’s short track team, which desperately wants to earn some measure of redemption after a nightmare of an Olympics in Sochi, will have the 500-meter quarterfinals on the same day. They also are competing in the 5,000-meter B relay finals, the non-medal race done for ranking.

“I think my physical condition is better than it was in earlier competitions,” said Lee Han-bin, who will compete in the 500-meter quarterfinals. “I know that the team disappointed the nation, but we will put forth our best effort to wrap up the Sochi Games well.”