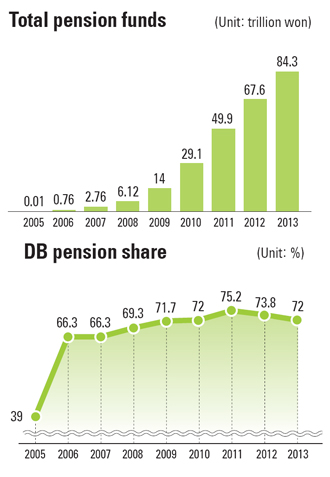 Bank deposits aren’t the only financial products suffering from prolonged loose monetary policy: Rates of return pension funds have been falling, too.

Returns on pension funds at 47 financial companies last year averaged 3.82 percent, down from 4.62 percent in 2012. There’s even growing speculation about whether rates could fall to the 2 percent range this year.
This is the average profit rate on defined benefit (DB) pensions, which account for more than 70 percent of pension funds managed in Korea. DB pensions are typically managed by the company the employee works for.

Another popular product is the defined contribution (DC) pension that represents 20 percent of pension products and is managed by individual employees.

The remainder is individual retirement (IR) pensions. Unlike the other two types where subscriptions are made under the name of the company, the IR account is in the name of the individual. Subscribers to DC and IR pensions allow employees to choose the product, whereas DB pension products are determined by companies.

For example, Samsung Life manages more than 12 trillion won ($11.15 billion) of DB pension funds, half of which are under contracts with Samsung affiliates.

Since the retirement pension program was adopted in the country in December 2005, subscriptions have grown significantly. The national pension fund, which is managed by the government, was introduced in 1988.

Despite the continuous expansion of pension funds, the rate of return has fallen sharply compared to the past. The average return on pension funds from 2007-12 was slightly below 5 percent. In 2007, when public interest in pensions blossomed, the rate was 5.7 percent. It dipped to 3.3 percent in 2008 and then bounced back to 6.7 percent in 2009.

The primary reason the return hasn’t matched past performance is because of loose monetary policy, which depressed interest rates.

The central bank held the benchmark rate at 2.5 percent for nine consecutive months, and market experts project it will likely remain at that level until at least the third quarter.

“Retirement products that guarantee the principal mostly invest in deposits, treasury bonds and corporate bonds with credit ratings above AA, therefore the investment performance is very much the same [among different financial institutions],” said Na Chang-joo, who heads the pension department at Heungkuk Life Insurance. 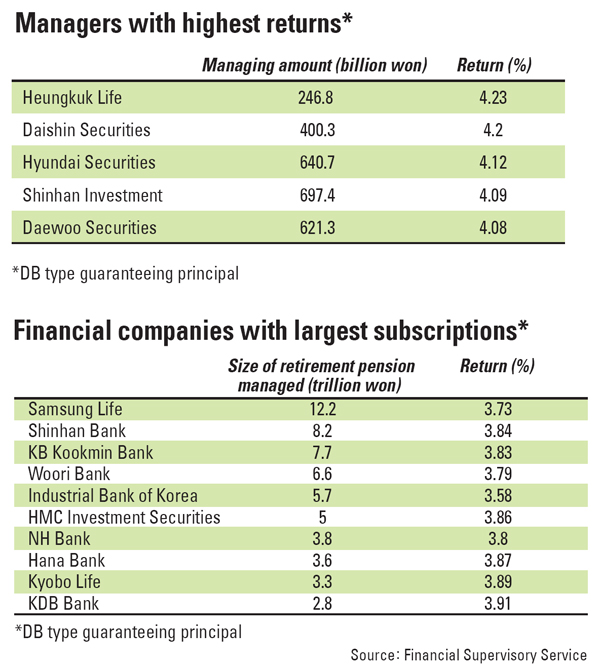 A 3 percent return is not enough to cover living expenses during retirement, according to a study released in June by LG Economic Research Institute.

The report said that for the recipient to receive more than 20 percent of current income after retirement, the return on investment must be at least 7 percent.

“With market interest rates falling to the 2 percent range, it will be hard to maintain a return of more than 5 percent when more than 80 percent of pension funds are principal-guaranteed products,” said Lee Han-deuk of LG Economic Research Institute.

Concerns are building because the central bank currently shows no signs of tightening monetary policy anytime soon, particularly as Governor Kim Chong-soo only has one more monetary policy committee meeting before his four-year tenure at the Bank of Korea expires.

“The interest rate on deposits a year ago was in the mid-3 percent range,” said a bank official who asked not to be named. “This has recently dropped to 2 percent.”

The official said considering that retirement pensions are managed conservatively, this year’s return could drop to 2.8 percent to 2.9 percent, slightly above the central bank’s consumer price growth estimate of 2.3 percent.

The Organization for Economic Cooperation and Development’s average investment of retirement funds in the deposits was 6.3 percent, and 2.7 percent for insurance products.

Instead, the funds were invested in riskier, higher-return investments such as bonds (47 percent), funds (19 percent) and securities (15 percent).

Some even propose expanding investment in overseas markets, with the Kospi failing to move beyond 1,970 since the beginning of the year.

Currently, nearly 93 percent of pension funds invested in stocks are in the local market.

Meanwhile, even brokerage firms that manage smaller amounts were more profitable than banks or insurers.

Heungkuk Life, which manages only 246.6 billion won of DB pension funds, reported a return of 4.23 percent, highest among the 47 financial companies.

Most banks reported returns in the 3 percent range, including Shinhan Bank, which manages the second-largest pension fund after Samsung Life at 8.2 trillion won.