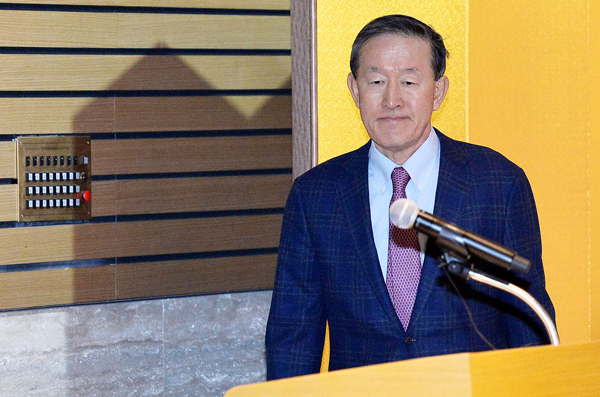 Local business groups - particularly the Federation of Korean Industries (FKI) - are trying to return to their glory days when they were acknowledged by the public as being major contributors to economic growth.

Their efforts, however, are not paying off.

In its general meeting yesterday, the FKI, the country’s largest business lobby, was expected to discuss the addition of conglomerate chairmen as members, but the issue was not placed on the table.

Industry sources note that the federation group has been struggling to find new chairmen to fill seats that are expected to be vacated soon.

Earlier this week, Doosan Group Chairman Park Yong-maan expressed his intention to step down from the group of chairmen at the FKI, while Kang Duck-soo, the former chairman of cash-strapped STX Group, will no longer be an active member.

“We’re not putting off our plan [to add more chairmen as members],” said an official from the FKI. “It’s just that we’re trying to take more time and proceed slowly.”

The official said that the business group will work to expand the number of chairmen belonging to the FKI to enhance the group’s status.

Unlike in the past, local business groups are struggling to find a solid foothold in the country.

In Korea, there are five major business advocacy groups - the FKI, the Korea Chamber of Commerce and Industry (KCCI), the Korea Federation of Small and Medium Business (KBIZ), the Korea International Trade Association (KITA) and the Korea Employers Federation (KEF).

But the contributions they have made over the past 50 years in boosting Korea’s economic growth are hardly remembered by the public.

Instead, they are often seen as conservative groups that are only concerned about the interests of their members and conglomerates.

According to a 2005 report by the East Asia Institute, the FKI ranked as the ninth most-influential organization in Korea. Last year, however, its ranking fell to 15th, lower than that of individual conglomerates like Samsung and Hyundai Motor.

The FKI also ranked 13th in terms of public trust, which is lower than each of the political parties.

Today, there are rising concerns over the role of the FKI and its influence. Major conglomerate chiefs who are members of the FKI have been less than faithful in attending meetings since last year.

And it’s not just the FKI.

The Korea Employers’ Federation is struggling to find its next chairman after current chief Lee Hee-beom last month expressed his intention to resign. Lee’s term ends next Thursday, but the federation has still not found a successor.

Industry insiders note that the chairman seat will remain vacant for a while.

“There are many issues piled up for us, including those related to ordinary wages and reducing working hours, but possible candidates who have been recommended to take on the chairman role are refusing,” said an official from the Korea Employers’ Federation. 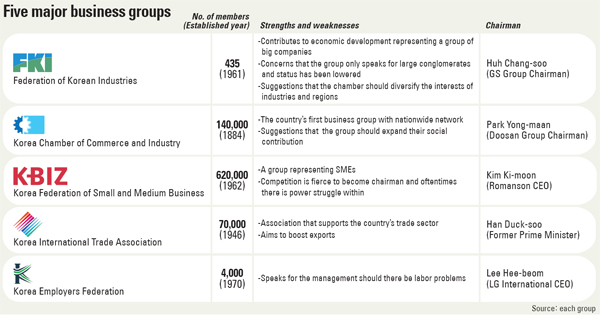 Industry sources say one of the reasons business groups have lost vitality is because there are currently many conglomerates in which owners have inevitably left seats due to embezzlement scandals.

The FKI has been searching for chairmen to join as new members, but sources say the plan was put off as there were no figures showing interest in joining the group.

Making matters worse, Park Yong-maan on Wednesday made the remark that he would “like to be excluded from the FKI chairmen group,” because he wants to focus on the chairman position he holds at the Korea Chamber of Commerce and Industry.

“Large companies over the past decades have been paying huge membership fees [to the FKI],” said an executive from a large company. “Despite that, what has the business group done when companies were under attack by the public and politicians?”

The business group has undertaken efforts to expand membership to IT and midsize companies as part of its reform plan, but major portal companies Naver and Daum declined the offer to become members.

“We were hesitant as to whether or not we should join the FKI considering the current status and reputation the group has,” said an official from a company that received the offer.

An executive at a midsize company also said, “The FKI accepted SM Entertainment and YG Entertainment as members, but there seems to be really no reform in its organization or people. It should rather express clearly that it is willing to contribute to social development.”

Meanwhile, sources also note that business groups are not keeping up with the changing times.

While there are many new business sectors being created with companies becoming more specialized in their respective fields, the groups are not abreast of the rapid changes that are happening in the business world.

“In the past, business lobby groups were able to speak out on issues with a united voice, but now they tend to have different voices and too often seem to be in conflict with each other,” said an official from a regional chamber.

“Business groups should go back to square one and make serious efforts to revive the economy, which is their foremost goal,” said Kim Tae-yoon, a public administration professor at Hanyang University.

Suh Yoon-seok, a professor at Ewha Womans University, also noted, “Like the Brookings Institution in the United States, the FKI should become a group that is a leader in society.”