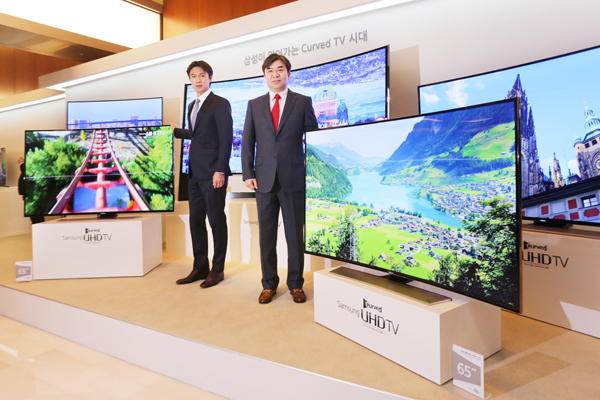 The world’s first curved UHD TV was launched by Samsung Electronics yesterday at a TV Media Day event at the Samsung headquarters in Seocho-dong, southern Seoul.
After launching the 105-inch curved UHD TV along with 78, 65 and 55 inch models, Samsung said it has launched a new era of high definition television.
It also expanded its flat UHD TV product line to 110, 85, 65, 55 and 50 inches, saying it hopes to dominate the UHD TV market.
“Samsung Electronics’ Curved UHD TV is an innovative attempt to change the TV paradigm once gain following earlier innovations such as the Samsung Bordeaux TV launched in 2006 and Samsung LED TV in 2009,” said Kim Hyun-seok, head of Samsung Electronics’ visual display unit.
“With the launching of the curved UHD TV, we aim to maintain the top position in the world’s TV market for nine consecutive years,” he said.
Samsung Curved UHD TV gives a strong sense of a viewer actually entering the TV. The curved screen broadens the viewing area, giving a so-called “panorama effect.”
In addition, it has an ultra-clear picture with four times more pixels than full HD TVs.
It also has an Auto Depth Enhancer function that automatically separates objects from backgrounds by analyzing the video on the screen so that viewers can enjoy vivid realism.
Samsung also introduced accessories to enjoy with the curved UHD TV.
An F850 sound bar equipped with a vacuum tube amplifier enhances the realism of live sounds when viewers watch sports events or a live performance. It also goes well with the Curved UHD TV because of its stylish metal design.
As for smart functions, Samsung’s curved TV offers multitasking that is two to three times faster than previous smart TVs thanks to a Quad Core Plus Processor.
It also has an instant on function, which gets rid of the delay of a TV starting.
It has a Multi Link Screen feature in which users can use smart TV apps to search the Internet, watch YouTube and use social network services while watching TV at the same time.
Viewers can divide the UHD TV screen into four windows.

Samsung also strengthened its Soccer Mode so that viewers can enjoy the world’s largest soccer festival this year.
Its Soccer Mode provides “multi surround sound” along with vivid colors of the field.

Viewers can divide the TV screen into nine in Soccer Mode so that they don’t miss any of the player’s gestures or facial expressions.