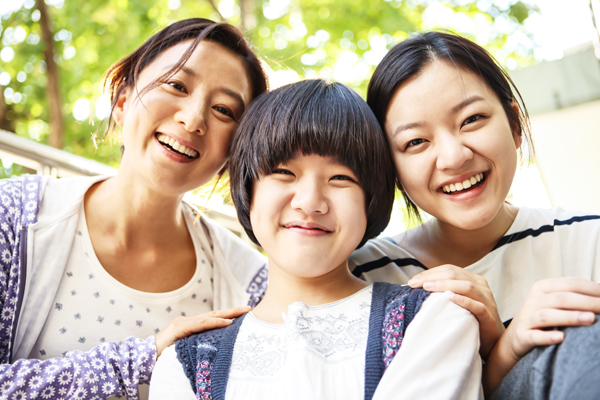 It’s the sort of thing we say all the time. Not necessarily because we mean it, but because it’s the easy answer. Often, “fine” is a lie.

It’s that kind of simple, day-to-day falsehood that director Lee Han explores in his new movie, “Elegant Lies.” Based on Kim Ryeo-ryeong’s novel of the same title, “Elegant Lies” explores the turmoil a family goes through after the youngest daughter, Chun-ji, commits suicide. Nobody knows why Chun-ji made such a dreadful decision. But in the aftermath, there is nothing her parents and older sister can do but carry on.

This is Lee’s second time tackling a novel by Kim, following “Punch,” which was the fourth-biggest movie in Korea in 2011.

“I decided to make a movie out of a Kim story again, after ‘Punch,’ for the people who think this family’s story is as special as I do,” said Lee at a press conference for “Elegant Lies” held at Apgujeong CGV, southern Seoul, on Tuesday.

Veteran actress Kim Hee-ae plays Chun-ji’s mother, in her first film role in 21 years. “As a mother of two children, I sympathized with the story,” she said. “I think any mother would, at least once in her life, worried about this sort of issue,” said the 46-year-old actress. “And at the same time, it’s also something that can happen with grown-ups.

“There were moments when I was worried the movie might seem too serious, but the film included a lot of humorous scenes, which kept it lighthearted,” she added.

Ko Ah-sung, the young actress who shot to fame in Bong Joon-ho’s megahit “The Host” (2006) and had an important role in last year’s “Snowpiercer,” played Chun-ji’s older sister, Man-ji. Ko said that she was hesitant about taking the part when she first read the script. “I believe that, to some extent, acting has to be based on real experiences,” she said. “However, because I don’t have such heartbreaking family incidents in my life, I was worried whether I could play Man-ji’s character.”

But Ko said that she was convinced by the strong cast. It also helped that she has a resemblance to Kim Hyang-gi, who plays Chun-ji.

As for why Ko chose this role, whether it was part of a larger strategy, the young actress said she never planned it. “I mostly rely on my instincts when I choose my next film, instead of approaching with a certain strategy. But the ones with good results tend to be more memorable,” said Ko.

The movie also includes strong supporting roles from actors such as Yoo Ah-in, who was also in Lee’s “Punch.” In the film, Yoo plays a mischievous and jokey guy who lives next door to the family.