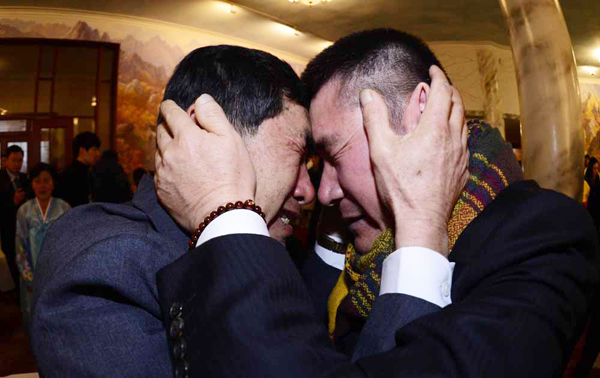 Tears, hugs and poignant wailing accompanied the reunions of long-separated relatives, the first in almost four years - and, for some of the most elderly, almost surely the last.

A total of 82 South Koreans were reunited yesterday with 178 North Korean relatives - siblings, children and cousins - they haven’t seen since being separated by the 1950-53 Korean War. It was the first of three days of bittersweet meetings, which will be followed by three days of reunions for 460 more people.

At the highly emotional occasion held in North Korea’s Mount Kumgang resort, participants clutched hands, hugged each other and shared stories in an attempt to catch up after six decades.

The seniors, who are mostly in their 80s, dabbed their eyes with handkerchiefs and many broke down in tears. Some were speechless and bewildered at the sight of relatives unknown to them for years.

“Dad waited for you, sis, but he died 10 years ago,” Kim Myeong-bok, 66, told his 68-year-old sister from the North. He brought a note from their father. “He talked a lot about you,” Kim said. “I didn’t even imagine meeting you like this in dreams.”

The eldest of the participants, 96-year-old Kim Seong-yun, was calm and had little difficulty communicating with her two younger sisters. During conversations, she recalled many things and shared childhood memories with them.

Gang Neung-hwan, 93, met his son for the very first time. During the war, he was separated from his wife, but he didn’t know that she was pregnant or that she later gave birth. He only found out about his son after applying for the reunions.

When father and son met, their resemblance was obvious.

They cried for a long time as they hugged.

Some seniors in their 90s didn’t recognize their long-separated relatives.

“Hey, sis, it’s me, can you hear me?” Ri Jong-sil, a North Korean woman, told her 88-year-old elder sister Lee Yeong-sil. Lee suffers from Alzheimer’s and has difficulty recognizing people.

“We were not sure if she could come here, but she insisted,” Dong Seong-suk, Lee’s daughter, said. She helped her mother understand the conversation by shouting in her ear.

Among the families, there were five people whose relatives were abducted to North Korea during and even after the war, an unusual phenomenon for the reunions.

Park Yang-gon, a 53-year-old from South Korea, was reunited with his elder brother, Yang-su, who was abducted to North Korea while working on a fishing boat in 1972. He was one of 24 crew members fishing in the Yellow Sea on a vessel called the Odaeyang (Five Oceans) 61 that was seized by a North Korean patrol ship.

“First of all, I’m glad you are still healthy,” the South Korean told his brother after they wailed together for a long time.

The North Korean brother introduced his wife and son. He also showed three decorations he said he received from the Communist regime’s ruling party.

“I am living a good life with consideration from the party,” he said.

As North Korea officially denies abductions of South Koreans, there was no official way for Park to confirm the whereabouts of his brother. About 12 years ago, however, he said he heard his brother was alive in the North.

“Everyone has told me the fishermen must have all died,” Park said. “I could do nothing but wait.”

A South Korean participant denied that the North Koreans she was introduced to were relatives.

“He is not my father,” Choe Nam-sun, 65, said after looking at a photo of a man brought by three North Koreans who said they were her half-siblings. “However I look at this photo, he is not my father.”

After her objection, South and North Korean officials rechecked her identification.

After being greeted by Unification Minister Ryoo Kihl-jae at a resort in Sokcho, an eastern coastal city, the 82 South Koreans and 58 relatives accompanying them departed at 8:20 a.m. yesterday for the Mount Kumgang resort.

The three days only amount to 11 hours of actual reunions. The families have to sleep and have meals separately. They can only interact under a fixed schedule composed of group meetings, group lunches and closed-door individual talks. During the individual meetings, they can present gifts.

After the two-hour group meeting yesterday, the families had a dinner party.

On the final day of reunions, Saturday, they will have to go through heart-wrenching farewells. The chances they will meet again are slim.

Two seniors in poor health arrived in ambulances and met with their relatives while lying on stretchers. Their reunions were not open to reporters.

Kim Seom-gyeong, a 91-year-old who met with his son and daughter, took a fall before the departure for Mount Kumgang Wednesday. Doctors accompanying him said he got a cold and was in the worst health among the senior participants.

“We asked him if he was still going ahead, he said he wants to die there if need be,” an official of the South Korean Red Cross said. “So we decided to take him by ambulance. But we need to check his health and judge whether he can participate in the entire schedule.”

His reunion was done in an ambulance at the resort.

Hong Sin-ja, 83, also expressed her will to attend the reunions, although she recently went through back surgery and had to be brought by stretcher.

“Although I am ill, I came because I thought, ‘I must go there even if I die there,’?” Hong said.